Skip to the content
05.11.2022 (13:55) Russian Defence Ministry report on the progress of the special military operation in Ukraine
05.11.2022 (06:30) Mobilised personnel about to finish their training course in Moscow region Guided by experienced instructors, the trainees practise to neutralise armoured vehicles operating within their units.
05.11.2022 (05:00) Mobilised personnel continue learning main subjects in Volgograd region Moreover, the trainees have learnt to amend settings for shooting in various meteorological conditions.
WtR

🇺🇲🇺🇦🇷🇺 The administration of US President Joe Biden is privately urging Ukrainian President Volodymyr Zelensky to show openness to negotiations with Russia, The Washington Post writes. 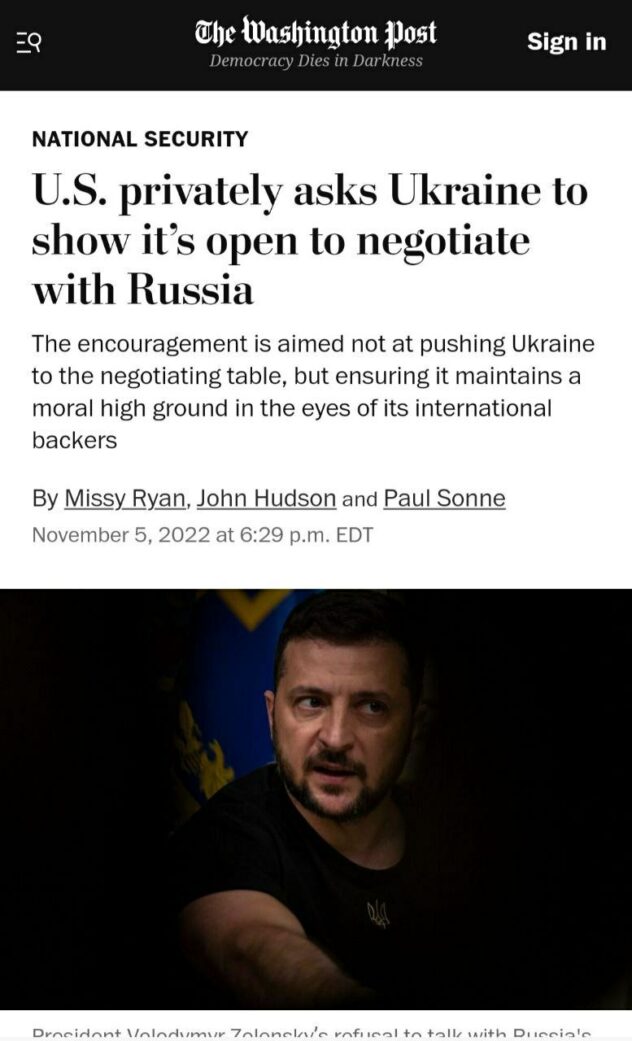 04.11.2022 (13:45) Russian Defence Ministry report on the progress of the special military operation in Ukraine
04.11.2022 (05:40) SMD pontoon units evacuate civilians from Kherson and right-bank part of Kherson region to left bank of Dnieper Pontooners and civilians are constantly attacked by missiles launched by the AFU.
04.11.2022 (05:30) Assault aviation crews launch missile attacks at military facilities and equipment of AFU units The action of airpower has resulted in the elimination of AFU camouflaged fortified field positions and armoured vehicles.
04.11.2022 (05:10) Mobilised personnel practise methods and tactics to operate within combat groups in Stavropol region Servicemen mastered their skills in shooting with Kalashnikov machine guns, RPG-7V anti-tank grenade launchers, and AK-12 assault rifles.
WtR

And I’ve commented on this before, but if the west and the “I stand with Ukraine” volunteers gave a damn about civilians in Ukraine, they’d be shipping heavy blankets, coats and gloves, not trying to round up night vision, guns and funds for drones and artillery…

Now the west is saying Ukraine will starve. (Economist, the trash western media site, says so!) I am sure Ukrainians will starve and said so many months ago, when the EU has been stealing Ukraine grain…

Yet it seems that if Ukraine exports gigantic amounts of grain, it cannot have a food insecurity risk…

PART I. «Ukrainegate»: Ukrainian interference in the US 2016 presidential election

For those who can’t open the link because of the site block I will publish my investigations in a text form. Here is the 1 part.

From the first day of incumbency as president of Ukraine Vladimir Zelensky found himself in troubled waters. Outgoing leader of the country Peter Poroshenko left for him not the rich but problematical heritage. And one of these problems is “Ukrainegate“. This scandal differs from the American one of 1972-1974 and goes far beyond the national borders. It is about Ukrainian interference in the US 2016 presidential election and Hillary Clinton promotion. At that time I was in Kiev observing what had been happening and I had a very clear picture of events connected to the US 2016 election. The information that I had was filled by the facts from other sources: opened data bases, data leaks, hacker information and American and Ukrainian news media. In this investigation, my fair readers, I’d like to share with you all the facts that I gathered and the conclusions based on these facts.

PART II. “Ukrainegate-2”: three questions on the Ukrainian interference in the U.S. presidential elections in 2020

Earlier we described in detail how Petro Poroshenko tried to influence the American elections in 2016 and as seriously he miscalculated throwing all capabilities on Hillary Clinton’s support.

And the story gave the Ukrainian ex-president a chance to regain a rightful place in the ranks of close friends of the newly elected American president, and at the same time compete with Volodymyr Zelensky for defeat in the 2019 presidential race.

On March 17, Poroshenko made another philippic statement on Russia and Putin, warmly thanked Biden for tough words against the Russian president and also accused Zelensky of interfering in the U.S. elections in the interests of Donald Trump.

The ex-president talked about the notorious recordings of phone calls between Biden and Poroshenko, which were made public by the member of the Verkhovna Rada of Ukraine Andrei Derkach at the height of the U.S. election campaign in the summer of 2020. It followed that U.S. Vice President Joe Biden pressured the Ukrainian president, demanding the Prosecutor-General Shokin dismissal under the threat of withdrawing U.S. consent to provide Ukraine with an IMF loan of $1 billion. This revelation confirmed numerous rumors about the corruption ties of the U.S. Democratic Party leaders in Ukraine, which have been circulating in the U.S. since 2019, and almost disrupted Biden’s election campaign.

PART III. Ukrainegate-3: how Zlochevsky saved himself and Biden

In the previous investigation we revealed in detail the corruption schemes in the gas market of Ukraine, which involved US President Joe Biden, members of his family, as well as the most influential representatives of the establishment of the US Democratic Party. As a result of large-scale financial fraud, hundreds of millions of dollars were deposited in the accounts of the leaders of the Democratic Party.

Meanwhile, new facts of the sensational “Burisma case” were revealed. We have at our disposal the materials of criminal cases against the Director of Legal Affairs of the  “Burisma” company Andrey Kicha, the former Head of the Department of the State Fiscal Service of Ukraine Elena Mazurova and the First Deputy Head of the Main Department of the SFS in Kiev Nikolai Ilyashenko. The defendants in the corruption scandal that broke out in June last year were charged with attempting to pay a bribe of $5 million to the Head of the Specialized Anti-Corruption Prosecutor’s Office Nazar Kholodnitsky and the Head of the NABU Main Division of Detectives Andrei Kaluzhinsky for closing a criminal case against the owner of the Burisma Holding Nikolai Zlochevsky on charges of embezzling a loan from the National Bank.