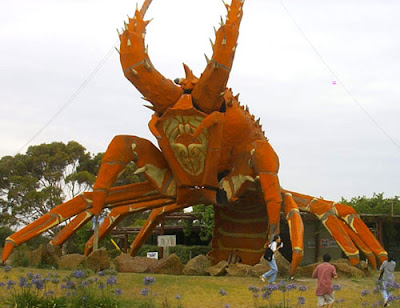 I wrote a very small article on this last weekend meeting between Putin and Bush. I said it was a good time of the year to have a BBQ. Boy, I was wrong, They had Lobster. They should have rethought that menu, Putin can have Lobster any time he feels like. Putin can have any food he wants! But in Russia they do not think of BBQ like Americans do. They could have at least had a clam bake on the beach!!!!
link: http://kylekeeton.com/2007/06/putin-bush-to-share-thoughts-once-again.html

Putin came all the way to America to eat Lobster!

What better way to enjoy the Fourth of July!!!!

Once again, I am really glad that Putin and Bush are such good Buddies!

I was drinking my coffee again and thinking. I was thinking about my Dad. My Dad died when I was around 21 years old. I feel lucky that I had him that long. My wife’s Dad died when she was 3 years old. So I feel very fortunate that my Dad was alive when I grew up.

My Dad wanted to do something with his life. He wanted to join the Peace Corps. He wanted to start his own business. He wanted to see other countries. My Dad never talked much to me, but he would make statements. Like before he died, he said to me, : “I do not want to be on artificial life support, If I am ever hospitalized.” That’s is all he said no less no more. When my Dad died I remembered his words. They helped guide me on his last day on earth. The decisions I made at 21 years old, when he was dieing, was based on many of the statements that he said to me.

My Dad wanted to travel the world. (I am trying) I have been to Germany, Mexico, Vietnam, Hawaii, Ukraine, Moldova, Canada, and I live now in Russia.

The things my Dad wanted, He was not able to do for himself. But he instilled them in me. I live some of the life, that he wanted. I guess you could say that is what I got, from my Dad. The desire to explore. The need to see what is over the horizon.

The next place that my Wife and I want to go to, is China and Mongolia. We have this trip in our dreams and hearts. I am lucky, my Wife likes to explore also!

My Dad lives on in me. Like I hope that I will live on in my Son and he lives on in his Son.

So, I plan on traveling with my wife! She is the keeper of my soul! She has the key to my heart! When I travel to China and Mongolia, She will be by my side and we will be like two kids enjoying the sites.

But I will also think of my Dad, for he watches over me, smiles in approval, as I take some of what he has taught me and try to make a better life for myself. I think my Dad would like my life now!

I just wish that I could call him and say ,”Hey Dad, guess what?”

Putin this Sunday is to go to the Bush family’s oceanfront estate in Kennebunkport, Maine. There will not be a lot said about this meeting. This is an opportunity for the two most powerful men on earth to discuss issues that the media plays games with, like Missiles, Cold War, and Vodka!

This is a good time of the year to BBQ in America. Potato salad, hot dogs, hamburgers, deviled eggs, coleslaw, baked beans, and Budweiser Beer!! I wish I could be there.

This is one of those meetings that a saying of my Grand Ma fits. “If only you could be a fly on the wall, the things you would hear” She is right!

The thunder is Crashing and the Lightning is Flashing. Boza our dog is hiding under the bed. I am enjoying the cool air and the refreshing of the ozone. The air smells wonderful and fresh.

The weather in Moscow is identical to the weather that I grew up with. It brings back many memories. Memories that were from a good childhood, My family was poor but I had all I could eat and never bored. I grew up on a farm most of my life. I can remember seeing the rain clouds rolling in, fast. At the last moment I would run for the barn and jump in the hay and play while the thunder rolled. Sometimes we had to go to the storm shelter or cellar and hide when tornadoes would be present.

Life is good, my Grand Ma always said: “Just look for the cloud with the silver lining! Every thunder storm has one of those clouds!”

The sun just came out while it was raining: A rainbow just appeared! My Grand Ma is smiling, for that would be the silver lining, as she would say!!

Russian view of the world!!

“Psychiatrist John Gleisner argues that we must develop a totally new way of thinking about ‘the enemy’ to avert a nuclear catastrophe.”

“‘GOTCHA!’ screamed the headline in the London Sun the morning after a British submarine sank the Argentinian warship General Beigrono in the South Atlantic last year. The 360 sailors who went down with their ship were only Argies— the enemy— and cheers resounded in pubs up and down the country.

Many were shocked to hear British people chant ‘nuke the Argies’ and to see how the Ministry of Defense and the media portrayed Argentina as a nation of international gangsters. It was a shock, but it should not have been. After all, governments and media throughout the world have perfected a psychological war machine which is highly efficient in fostering fear and hatred of ‘the enemy’. True, for us in the West the enemy these days is usually portrayed as toting a red flag and a fistful of nuclear missiles, but the fear and hatred are free-floating and can be attached, by skillful maneuvering, to any object.

Softened by centuries of insecurity, our minds are malleable clay for the psychological war machine. There have often been good grounds in the past for fearing the enemy, and the distinction between ‘them’ and ‘us’ was once necessary for survival. But nuclear weapons have changed everything.

Today that ancient them us distinction threatens the survival of them and us. As Einstein once said: ‘The unleashed power of the atom has changed everything except our way of thinking. . . we need an essentially new way of thinking if mankind is to survive.’

The old them-us thinking is dangerous because it leads us to accept the unacceptable. And the reasoning goes something like this:

‘The Russians are basically different from us. They are wicked bullies who intend to take over the world. We can stop them only by threatening them because bullies only respond to threats. And because they are basically different from us it is alright to destroy them if necessary. Nuclear weapons are terrible but it may be that the Russians cannot be stopped by any other means. Although nuclear war would be horrible, we have a reasonable chance of surviving. And anyway life under Russian rule would be far worse than death.’

If any individual spoke about another using logic like this they would be diagnosed as paranoid. And, indeed, them-us thinking is a time-honoured symptom of psychosis (a psychotic being someone who can no longer distinguish between events in the world and events taking place in their imagination), characterised by what psychologists call ‘denial’ and ‘projection’.

‘Denial’ is refusing to acknowledge one’s own unpleasant motives. ‘Projection’ is attaching these unacknowledged motives onto someone else and then rejecting them. It is the perfect way of having your cake and eating it too: of indulging your own bad motives and criticising them at the same time.

Our media and governments depict the Russians as aggressive expansionists bent on our destruction. A powerful perception of threat is created to soften up the public for yet more ‘defence’ spending, And in the Soviet Union precisely the same tricks are used to persuade Soviet citizens to make the necessary ‘sacrifices’ for protection against us.

Most of us have never met a Russian. Yet there are few of us without opinions about how dangerous they are. We tend to see our own country as conciliatory, just, trustworthy, rational, legitimate. Theirs is aggressive, unjust, untrustworthy, irrational and illegitimate. Yet anyone travelling in the Soviet Union is soon struck not only by the Soviets’ strong belief in their own peacefulness, but also by their surprise and puzzlement at the fact that foreigners do not view them in the same light. They fear us — for precisely the same reasons that we fear them.

The noted sociologist and psychologist Gregory Bateson drew an analogy between nuclear deterrence and drug addiction: the ‘fix’ (new weapon) gives a sense of well being that gradually fades only to require a bigger fix. What the two also have in common is a powerful dose of denial. Denial of the danger of nuclear war underlies government thinking on defense. The public’s denial may be less strong, but they are hampered in their understanding by a pervading sense of powerlessness, which in turn leads to more denial: nuclear war may well happen. But not to me.

Our thinking cannot change without combating denial and projection — the mechanisms of the psychological war machine. Logical argument in the face of paranoia is as ineffective as with a person in the grips of a psychotic episode. Emotion is what’s needed — emotion directed appropriately. Fear of nuclear war and its effects are legitimate and appropriate and can lead to reappraisal of the old fear — the Russian threat. Another method of penetrating denial is to look for the absurdity in the whole upside-down logic of the old them-us thought structure.

Confronting denial and projection can be painful, disorienting and can leave one feeling powerless. But another new belief network is gaining ground. The peace movement is at last building another way of thinking that can sway governments as countless people are daring to reject the old them-us psychology. But the question is: can we develop this new way of thinking in time to avert catastrophe?

Dr John Gleisner, a consultant psychiatrist at the North Western Regional Health Authority in Greater Manchester, is active in the Medical Campaign Against Nuclear Weapons.”)

I remember well the days of the Cold War, This article from 1983, is a perfect example of the mind set from that era. Dr. John Gleisner, all well known Psychiatrist. Put the whole issue in a nut shell, as we say in America. The people of America had never even seen a Soviet. But because the government was so active in propaganda. The Americans had an opinion about someone that they did not know.

This mind set will never change in America until the people accept the fact that the USA government plays games with them, Mind Games!