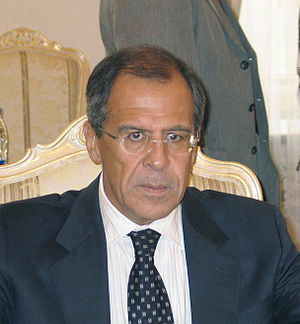 MOSCOW, October 10 (Itar-Tass) — Russian Foreign Minister Sergei Lavrov expressed confidence that the Libyan scenario applied by the West should not be taken as a model for solving similar internal political conflicts.

“We have been concerned about the statements of the NATO leaders saying that the Libyan model should be taken as an example for the future,” he said in an interview with the Profile weekly.

“Russia has never questioned the right of the Libyan people for better future,” he said. “From the very beginning we maintained contacts with the Transitional National Council notably that happened at the early stage of the crisis and we heard assurances that Libya wants to remain a friendly country for Russia. This fully meets our interests.”

“And we’ve heard, including public statements of the new Libyan authorities that their international obligations will be fulfilled,” Lavrov said. “Now, of course, it is early to speak about this on the practical level, because their short-term tasks are to stabilise the situation and to end military operations.”

“When the Libyan people find out how to live further, I am confident that we will discuss in practice with the new authorities the ways of our cooperation,” Lavrov said.

via ИТАР-ТАСС : Libyan scenario should not be taken as model – Lavrov.