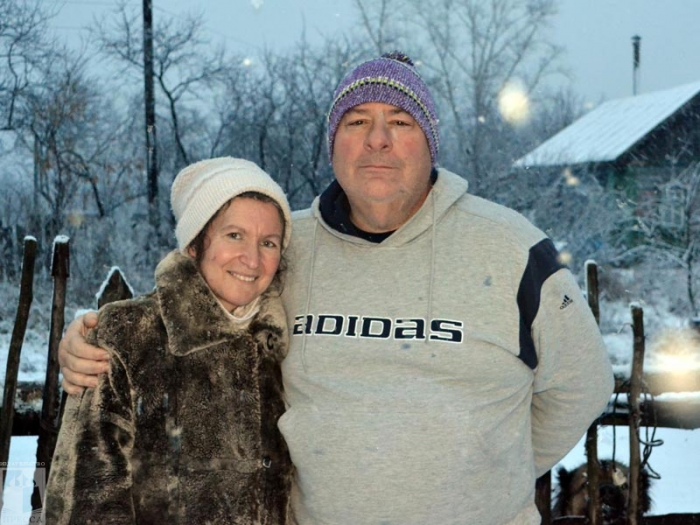 In Sarai area there was an unusual lodger. An American Kyle Keeton masters the Ryazan hinterland.

– “I grew up in the west of America, Missouri, where, too, are frost and cold. Only the winter there is much shorter than in Russia” – says Kyle. – “So I am not afraid of Ryazan province.”

Kyle calls the outback village “Dawn of Liberty.” It was here that he lived in a small house, bought his wife, Svetlana, 25 years ago. Generally Svetlana originally from the area, but her parents’ home at the time became dilapidated, and then collapsed. So I had to buy a new one because it would not let small homeland. Initially, Svetlana went here with her son, and now with her husband Kyle.

They met through social networks. But soon the virtual communication has grown into a whirlwind romance. By the way, as is often the case. And for the first meeting in the United States, more and more … And ended up bad in that … Kyle decides to move to his beloved Russia. Since then, it has been 9 years they are together. Neither one nor the other, almost, did not know the language of the partner. Svetlana although I could understand something at school and university education, and Kyle never even studied Russian. But they understood each other perfectly. True say, the language of love is clear to all. 🙂

A biologist by schooling, but not trying to find a job in his field. Kyle knows very well the restaurant business, so once a hobby has now become his job. Again with the help of social networks, he earns his living from the comfort of home.

– What did your family say when they learned that you leave America and move to live in Russia? – I asked Kyle. He looks at his wife, who quickly puts him my question.

– “Unfortunately, they did not understand me. Son still can not come to terms with this. Most likely, because it just Russia, which surprises me with its simplicity” – says Kyle.

When asked of Obama: – “I have never understood Americans who admired him, nothing in this case, of not presenting themselves. In Russia, much more intelligent, talented, intelligent people. And again, good. The Russians want war neither, unlike Western countries, which are due to swaying of economic policy under different pretexts want to unleash it. You know, there are policy leaders, that is, their country is in their heart. They do and will do everything for their homeland. That those I consider Vladimir Putin. And moreover, I would say right now what you probably did not expect to hear from me. Many Americans would like to see their president was not Barack Obama but Vladimir Putin. Personally, I have never supported the policy of the current US president.”

– Kyle, you probably will not be easy to live in the countryside? Get used to agree, after the city life to life in the periphery is not just? After all, as I understand it, to go to Moscow, Svetlana?

– “I think that I will have no problems. Svetlana, really leaving, she had to work, I was left alone. But people quickly adapt to any situation. There I met a wonderful friend, Vladimir Polyakov. We somehow found the right understanding. And, despite the fact that I almost do not speak in proper Russian, except okey, yes, no, we understand each other. I consider him a true friend, this I was not even in America, where I have lived most of their lives. This once again underlines the fact that in Russia, very good people, with an open mind and a big heart.”

And Vladimir Polyakov joins the conversation and slaps Kyle on the shoulder: – We’ll survive the winter, don’t worry, and then you and I will fly into the space in the spring.

Kyle blinks in surprise, but, when all around are starting to laugh, joined in.

Vova loved the article and I understand that the whole area loves the same, I will not question the accuracy, nor the facts. What counts is that everyone has a feel good story of love and an American who loves Russia. That is needed right now in a country that is being abused by the USA…

I liked it and am proud to have talked to the paper about a few things. Let it be what may, I am accepted in the community and that is what matters to me the most…

Have a nice day…

(and yes. “We’ll survive the winter, don’t worry, and you and I will fly into the space in the spring.“)