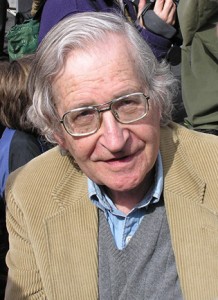 Avram Noam Chomsky is an American linguist, philosopher, cognitive scientist, and political activist. He is an Institute Professor and professor emeritus of linguistics at the Massachusetts Institute of Technology. Chomsky is well known in the academic and scientific community as one of the fathers of modern linguistics. (Link)

It seems that Israel stopped him at the Jordan border as he was going to give a lecture at Bir Zeit University, and meet with Palestinian Prime Minister Salam Fayyad after the lecture. The border patrol it seems held him for hours and interrogated him. They even wanted to know why he did not have a Israel passport because he was Jewish. They also wanted to know why he was not lecturing in Tel Aviv. He replied something like, I have an American passport and I lecture a lot in Tel Aviv…

An official at the border was quoted as reading the following statement: ‘Israel does not like what you say’.

To this, Chomsky replied: “Find one government in the world which does.”

Now according to news reports Israel has tried to explain that it was a mistake!

Noam Chomsky said, “I find it hard to think of a similar case, in which entry to a person is denied because he is not lecturing in Tel Aviv. Perhaps only in Stalinist regimes!”