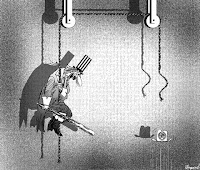 The St. Petersburg Times – Opinion – The 2nd Superpower: “Few people around the world foresaw the collapse of the Soviet Union or the demise of communism. But back in 1981, Robert Tucker, a prominent neocon and an old-school U.S. isolationist, surprised our graduate seminar at an international affairs school by suggesting not only that the Soviet empire might be on its last legs, but that if and when it crumbled it would not be such a great thing for the United States.

Having just emigrated from the Soviet Union, I was convinced that communism would endure forever and that the old men ruling the Kremlin were winning the Cold War. But if the Soviet Union were to disappear, I didn’t think there would be much to regret.” (Read More)