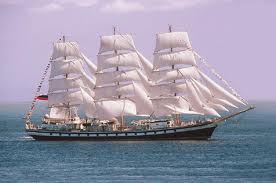 As you know I love to follow the Russian tall ships. So when something comes up like: The Russian tall ship Pallada arrived in Honolulu on Monday, part of its international trans-Pacific expedition that kicked off in the Russian Far Eastern port of Vladivostok on July 1. During her stay in Honolulu, the Pallada will traditionally host locals who are welcome to take a guided tour of the vessel and see an exhibition dedicated to 270th anniversary of discovering Russian America. The Pallada has already covered about 8,000 nautical miles since July 1. I just have to say something about it… 🙂