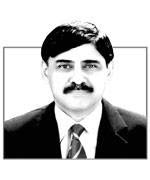 The planet is moving towards a non-polar world, rather than a multi-polar one. After World War Two (1945), the world was split into two camps or ‘bipolar era’ (the Cardinals of the Kremlin and Grand Masters of the White House). The demise of Soviet Union in 1991 left USA as the undisputed global master. America’s ‘overstretch’ abroad, contested by numerous quarters and capitalism going wild, exhausted it within two decades.
China emerged as an economic peer, Putin’s Russia as a strategic rival and elusive Islamic militants embroiled Americans in Islamic lands, even as the Arab Spring created a new equation. Meanwhile, EU faced economic crisis, while global wealth partly shifted into the ‘Petro Gulf’, Asian Tigers and Central Asian cities. The new entrants into the global economic arena included Brazil, Turkey, South Africa and even Mexico.
America had waged protracted, unwinnable wars in Afghanistan and Iraq. With a war weary public at home, the culmination point of US unilateralism had been reached. Even Robert Gates, the previous Secretary Defense, had warned that ‘USA should no longer get involved in land wars in Asia’.
In 2013, when USA was prevented from attacking Syria, it sought diplomacy with Iran (to the annoyance of Israelis and Saudis), and found Karzai reluctant to sign BSA. Kabul did sign agreements with India and Iran and would probably later with USA. But the world had changed for Washington. Even as the US made Asia Pacific its pivot with Air Sea Battle plans against China (akin to Air Land Battle against Soviet Union), its Middle East influence was slipping. Discovery of shale gas at home, besides difficulties abroad also reduced US’ appetite and penchant for Middle East energy reserves. The cumulative effect of all this and much more is that America remains pre-eminent but not predominant. In essence, US may lead but not control the world.
So, now that brings us to the non-polar world. ‘There is no need for conflict between America and China now that global dominance is no longer achievable’. Zbigniew Brzezinski Giants, but Not Hegemons (NY Times Feb 13, 2013)
The emerging non-polar world or zero-polar world has already cast a shadow on Middle East, South Asia and Central Asia confluence. Regional Geopolitics may be taking a new turn.
And now, we move onto regional geopolitics. Now the clock is ticking in Afghanistan. By next year, most US combat forces are expected to leave for home. Afghan war is already a forgotten story in US. Except for small vested lobbies, mainstream America wants an end to this war. Some Afghans living on US dole want US troops to ferry them along to the home of the brave. Some quarters in Pakistan are in a state of denial as to how and why should US leave Afghanistan (perhaps they never heard of US withdrawal from Vietnam). Delhi is petrified by the very idea of US leaving Afghanistan. US – Iran détente is possible, yet the geopolitics of the regions is extremely complicated. Normal relations between the two foes will take some time and are also hostage to future American Administration and their worldview.
The emerging non-polar world and regional geopolitics are positive trends for Pakistan. A unified Pakistan putting its house in order is a prerequisite. By combining its virtues, both as a ‘Bridge’ state and ‘Interposing’ state of multi-regions, Pakistan would guard its national interests. With peace at home and pursuing a nationalistic policy, Pakistan can achieve its rightful place on the map.