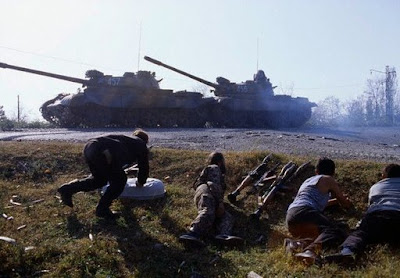 26 Oct 1993, Senaki, Georgia — Georgian Zviadist rebels lie low at the edge of a road in Senaki as tanks roll past during the Georgian Civil War. President Edouard Shevardnadze’s troops captured Senaki from the Zviadists (forces still loyal to ousted President Zviad Gamsakhurdia) in October 1993 after troops were sent to defend the autonomous region of Abkhazia from the Zviadist forces in August 1992. — Image by © Patrick Robert/Sygma/CORBIS

I was drinking my morning cup of coffee & reading an article about Abkhazia….
——————————————————————–
The Georgian-Abkhazian conflict can only be resolved with Russia’s help, Abkhazian President Sergey Bagapsh said after a meeting with President Medvedev in Moscow on Thursday. He also said Abkhazia does not see an alternative to the Russian peacekeepers and there can be no other peacekeeping forces in Abkhazia.

Bagapsh stressed that Abkhazia rejects any attempt to oust Russia from this process.

“Abkhazia has made its historical choice – it is a rapprochement with Russia. We will not deviate from this path,” he added.

For his part, Medvedev urged Abkhazia and Georgia to honour a ceasefire signed in Moscow in 1994, as well as UN Security Council resolutions on the conflict.

Abkhazia’s push for independence from Georgia led to a bloody war in the early 90s.

Russian peacekeepers have since been in the region on a UN mandate, separating the conflicting sides.
———————————————————————
I see a war on the horizon if NATO & the UN keep playing games with Georgia! Abkhazia is a very determined little country that wants its rights back as a country, do not forget they only became part of Georgia because Stalin gave them to Georgia. (Stalin was from Georgia)