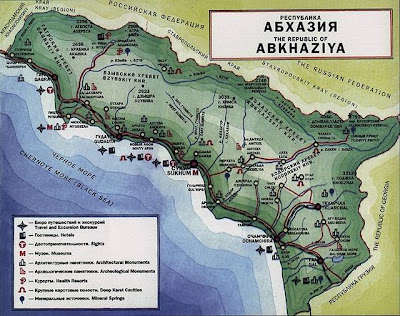 One of the most beautiful areas of the world is the little break away republic called Abkhazia! Attached to Georgia physically but not mentally. Abkhazia has it own freedom in mind & wishes that Georgia would go away. Keep in mind that this was a country that was forced to become part of Georgia back in the Stalin era…..
—————————————————
After 15 years of being under blockade Abkhazia’s holiday resorts are preparing for the return of tourists. Sea links between the breakaway republic and Russia are set to be re-opened.

There was a time when the port of Sukhumi was about to become Abkhazia’s main passenger terminal. But it never happened. In 1992 Georgian troops entered Abkhazia starting a full-blown war.

Almost all of Abkhazia’s territory stretches along the Black sea coast. Back in the 1980s there were plane and passenger lines serving the millions of tourists visiting this region. The towns of Pitsunda, Gagra and Sukhumi have been very popular vacation spots since the 19th century, when Abkhazia was part of the Russian empire. The patriarchs of the Russian Orthodox Church had their summer residence in the town of Afon.

However, Joseph Stalin merged Abkhazia with his homeland Georgia – a decision that, after the fall of the USSR, caused a violent military conflict.

Russian peacekeepers and UN observers managed to put an end to the bloodshed. But most of Abkhazia’s infrastructure, including airports and marine facilities had stopped functioning. Strangled by international sanctions, the self-proclaimed republic suffered from the blockade for more than 15 years.

Recently Russia lifted the sanctions, including economic and political ones. Georgia objected since it considers Abkhazia part of its territory, but Abkhazians hope that as well as opening sea routes to Russia, they will be able to travel to other countries by sea. Planned routes include not only ones linking Sochi in Russia to Sukhumi and Gagra, but also a link with Trabzon in Turkey.
Link to RussiaToday
————————————————–
When we traveled to Sochi this Spring we got a chance to see a little bit of Abkhazia. The only word that fits is: Beautiful!

Abkhazia just wants to go back to what they once were. I wish that Georgia would just leave it alone & let Abkhazia have peace….