Huawei Technologies Co said Monday that it posted 179.7 billion yuan ($26.8 billion) in revenue in the first quarter of 2019, representing a year-on-year growth of 39 percent.The company’s quarter one net profit margin stood at about 8 percent, slightly higher than the same period last year.Huawei said in a statement that it continues to focus on communications infrastructure and smart devices, and will develop the efficiency and quality of its operations, which contributed to its solid first-quarter performance.This year will see large-scale 5G deployment around the world, meaning Huawei’s carrier business group, which primarily supplies telecom equipment and services to telecom carriers around the world, has seen unprecedented opportunities for growth, the company said.By the end of March 2019, Huawei had signed 40 commercial contracts for 5G with leading global carriers, and had shipped more than 70,000 5G base stations to markets around the world.The strong performance showcases Huawei’s resilience despite the security concerns it faces in some markets. Huawei has repeatedly said the security allegations it faces are groundless and not supported by any factual evidence.

Source: Huawei revenue up 39 percent from one year ago – Chinadaily.com.cn

And simply this also… 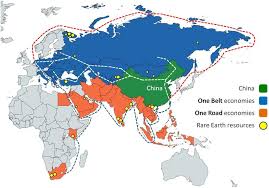 China’s Belt and Road Initiative, proposed by President Xi Jinping nearly six years ago, has made practical progress, with 125 countries and 29 international organizations having signed 173 cooperation agreements under the initiative framework as of March 27.Under the initiative’s five cooperation priorities of policy coordination, facilities connectivity, unimpeded trade, financial integration and people-to-people bond, there are a batch of projects, such as transportation construction and industrial infrastructure, in full swing or already having yielded fruitful results.Here are some of the amazing projects achieved worldwide under the initiative.

The deal is, we all have our time in the sun and China’s time is coming…

Will the Western Empire go quietly?

Will it try to take us all down with it?