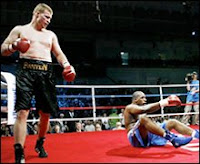 I watched a heavyweight bought Saturday night. It was live on Russian TV. (The fight was live but one of the fighters was not!)

I have seen some poor fights in my time & this ranks in the top 10 worst fights…..

Russian boxer Aleksandr Povetkin has earned a shot at the heavyweight title after a 4th round knock-out of Taurus Sykes. Saturday night’s victory, in the city of Chekhov just outside Moscow, means he will take on the undisputed champion Wladimir Klitschko for the heavyweight title in the Autumn.

What I saw during the fight was one of two things: The America (Sykes) was either so out of shape and had a fragile glass jaw, or he threw the fight. (Took a dive!) Either way It was a joke and the Russian fighter (Povetkin) knew it. When the fight was over Povetkin walked to his corner with a look of total disgust on his face and shaking his head as if to say: “I do not believe this bull!” The America fighter never got glassy eyed nor confused looking at any point. He just fell down or (slipped). The referee even called them slips. They reran the knock out punches maybe a dozen times. I never saw a blow land.

Povetkin was a very unhappy Russian because he was there to fight, instead he got a lesson on how to take a dive!