Definition of have a chip on one’s shoulder informal : to have an angry or unpleasant attitude or way of behaving caused by a belief that one has been treated unfairly in the past He has had a chip on his shoulder ever since he didn’t get the promotion he was expecting.

On One’s Shoulder by Merriam-Webster

Well Uncle Sam and all the wannabe Uncles, are walking around with a chip on their shoulder and daring anyone to knock it off…

Ole Uncle looks at Russia and says, “I dare you!”

Then we are looking at Iran and say, “I dare you!”

The list is rather long and getting longer at the countries we are walking around strutting like a rooster and saying, “I dare you!”

Just the last few days, we just threatened China with toeing the line or else…

United States is prepared to escalate economic, diplomatic and political pressure on China, Pence said. He believes the U.S. economy is strong enough to weather such an escalation while the Chinese economy is less durable.

Source: Pence: It’s up to China to avoid a cold war – The Washington Post 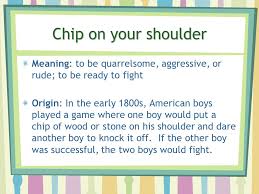 More sanctions against the world…