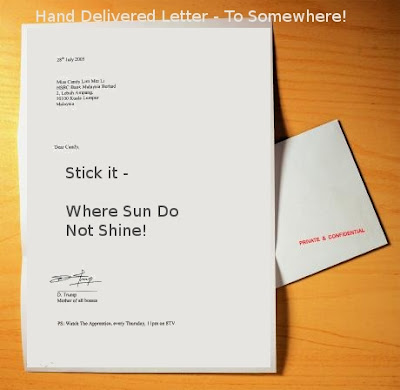 I was drinking my morning cup of coffee and looking at about a hundred articles from the Western press that makes it look that Obama is calling Russia on the carpet over the missile issue in Europe.

Western press and Obama sidekicks are bragging that Obama sent a hand delivered letter to Moscow with an ultimatum to Medvedev:

The New York Times newspaper quoted a senior Obama administration as saying: “It’s almost saying to them, Put up or Shut up.

“The Russians do not get to say, ‘We’ll try and therefore you have to suspend.’ It says the threat (Iran) has to go away.” (Link)

If I was Medvedev or if Medvedev would like a little American response advice, I would send a hand delivered letter back and say stick it up your…

Russia does not have to do anything at all because the USA is so broke that Missiles are the last thing that will be put in Europe. Sometimes my country acts like a spoiled rotten child.

Actually Obama and Medvedev are to meet around April 2nd in London. Medvedev could hand deliver the letter back. 🙂