Russia Today has just released a video on this boy at 12:30am…

Try this on for size:
A 7 year old Russian boy, who was adopted by parents from the United States 6 months ago, has arrived back in Moscow on this Thursday. He is now undergoing medical tests in a metropolitan hospital and seems no worse for the wear. The child arrived from America alone, and had a note with him. The note that the child gave officials said, We will not take care of him… (Note Below…)
Update in Story: Having bought a ticket and put the child on the plane, it seems Hansen found a Russian tour guide on the internet who agreed to meet the child at the airport.
This man, called Artur, passed him to the authorities in central Moscow. Hansen agreed to pay Artur $200 for meeting the child, said officials. 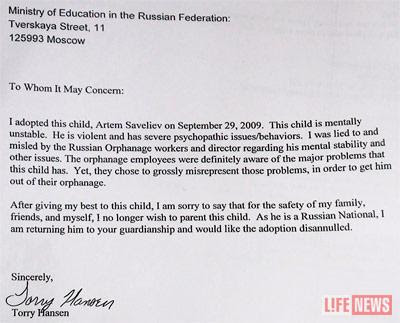 According to officials, the boy does not speak in Russian? , but does understand Russian. The childcare’s ombudsman, located in the police department, said the boy was named Artem. American parents gave him the name Artem (Artyom) Justin Hanson. He was adopted six months ago.
The American consulate has tried to acknowledge

that they will take care of the boy, but Russian police found a Russian passport on him and that gives Russia the ability to control the destiny of the child. As this is not the first time that Americans are having problems with the adoption of Russian children, and it seems that Russia is seeing a need to have tighter controls in the process of adoption.
At least this child was not killed like several others have been in America in the last year. Glad he is home…
Update after seeing all the reports and the letter that the boy had on him, I do see that this story is not over and Russians are upset… 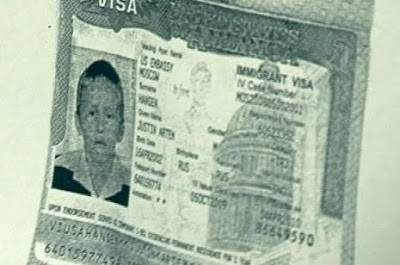