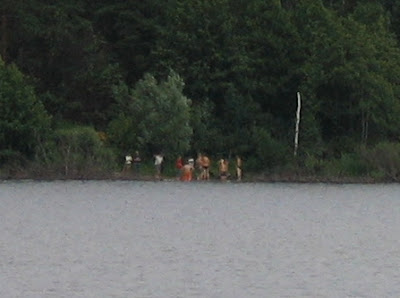 This is the only picture of the Americans I got! They were all the way across a lake. Sorry!

We just came back from the Village,

It was fantastic and we had a surprise at the Village!
The Village was busy there was people everywhere, There was probably 40 people. They were mowing grass and cleaning broken down Village houses. Now that was not the surprise. The surprise was, a group of Americans (about 30) were hiking the woods near the Village and they stayed at my Village!

We never really met them, just passed. We had no idea that they were all American, I heard multiples of languages when they passed by. So we never really talked. I was surprised when One guy was straggling up the rear of the group, We said hi and he responded “Hello”! I said wow he just said hello. I had not heard that for awhile. Never thought I would hear it in the Village.

So all in all around 70 to 80 people were at the Village. Now that was crowded! The wells were almost dry of water, The grass had paths everywhere. The only cow that lived there could not be found.(I think the Americans Ate It) :))))

This week coming up, there was going to be a wedding party at the Village. So we are going back this weekend to protect our Village House.

All in all, the village trip was wonderful and I am always amazed at what is going on at the Village. This is one of the most unique places on Earth. Where else can I go in Russia and find 30 Americans all in one spot???

Never have my camera when I need it!

Now, if I could find that Cow?