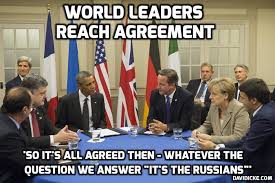 NATO chiefs, thrown into a panic by fears that Russian President Vladimir Putin might attack the West, are scrambling to put together a force of 300,000 troops which they can put on ‘high alert’. Relations between Russia and the West have plunged in the last year, with Moscow’s insistence on backing its Syrian ally, President Bashar al-Assad, at all costs leading to serious tension with the US, Britain and France. Most NATO members cut their defence spending dramatically since the Soviet Union collapsed in 1991 but Russia has been bolstering its military capabilities, holding parades involving more than 100,000 troops each year.

NATO puts 300,000 troops on ‘high alert’ in readiness for a confrontation with Russia as fears grow Putin is preparing to attack the West:

Seriously? This is a perfect example of the Western Empire Warmongering by NATO, which is owned literally by the USA!

Everyday there are new reports from NATO, America, Germany, etc….all talking about how Russia is going to invade Europe!

The west is in trouble, both mentally and financially. Seriously it is time to put our foot down and get these warmongers under control…

But hey! The armchair warriors are dancing in their seats over this kind of news…