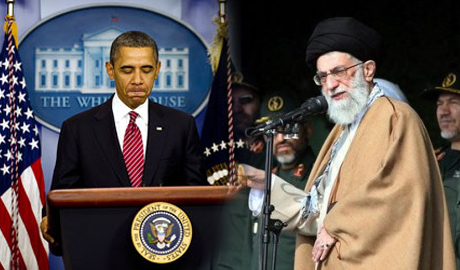 President of the United States of America Barak Hussein Obama and the Supreme Leader of the Islamic Republic of Iran Sayyid Ali Khamenei are brilliant scholars and teachers. Each is an exceptional orator and leader. Both are family men with wives and children. They both love their families and hope for them a bright future. Obama and Khamenei both “love” their country and the ideals on which it is based. Both are extraordinarily wealthy.

Obama is a brilliant scholar and student of of the US Constitution. That document—along with the American Declaration of Independence is as sacred to Americans as the Koran and the Iranian Revolution is to the people of Iran.

Likewise, Khamenei is an extraordinary scholar and student of the Koran and the Iranian Revolution. He is also is a former Secretary of Defense for Iran and decorated combat veteran of the Iran-Iraq war waged in the early 1980’s (the US supported Iraq).

Unlike Obama, who has sent US servicemen and women to die but has never experienced combat, Khamenei knows the horrors of war first hand. He has sent many to their deaths but as also fought along side them. He has also survived assassination attempts from rivals within his own country.

Obama and Khamenei command powerful military machines that operate in the open and in the darkness. These days the key actions is in the shadows. The United States has its Special Operations Command and Navy Seals, Green Berets and combined special forces units varyingly known as Delta or a Task Force falling under some sort of JSOC command.

Iran has similar components. According to Pakistan Defence, “Takavaran is the term used for a type of Iranian special forces troops. To be eligible for Takavar selection, a candidate must have at least two years regular service in the Iranian Armed Forces. Personnel must be male and if an individual is selected for Takavar, he will then go through an intense 20 month Operator Training Course. The takavaran (plural of takavar) fall under the direct command of the regular Iranian Army (Artesh), while the Pasdaran have their own special forces called the Qods Force. They are directly comparable to the U.S. Army Special Forces (Green Berets) of the United States, and Special Boat Service of United Kingdom through a near identical training and selection program.

Similar in Many Ways:

Both countries have complex political processes. When lobbying or trying to analyze the political scene in the United States, it is not enough to assess just President Obama’s speeches and policy designs. One must also look to the United States Congress, the Republican and Democratic parties, and the Pentagon and its assorted political allies. Part of that analyses includes reviewing the semi-official organs of the United States political, economic and military leadership: the New York Times, Wall Street Journal, the Washington Post and the major news networks like CNN and FOX.

It’s a similar situation in Iran. To try and comprehend the scene there one has to take in Press TV, IRNA and Tehran Times at least. Khamenei may be the Supreme Leader, but there is a raucous Parliament (which has a computer setup at each legislator’s seat), a Presidency and a Judiciary akin to the structure in the United States. In short, a republican form of government like that envisioned in Montesquieu’s Spirit of the Laws (1748) and upon which the founders of the United States relied heavily. Americans and Iranians have serious commonalities in their systems of government which provide many avenues for discussion.

Obama and Khamenei are shrewd political schemers in the midst of an election year. Both of these brilliant teachers, scholars and leaders have been overly influenced by radical elements in the United States (radical Christians, Israel) and Iran (radical Muslims, Israel). As such, they have heard the wrong voices and are sacrificing any prospects for peace between the nations on the crucifix of war, self interest and entrenched worldviews.

Neither one will bend towards peace and instead both fill the airwaves, computer screens and newsprint with ludicrous statements mainly centered on Israel. “We are in lockstep with Israel says Obama.” And Khamenei says this, “One of the outcomes of these movements is decline and isolation for the Zionist regime, which is very important, because the Zionist regime is truly a cancerous tumor in the region and it must be, and will be, cut off.”

Obama and Khamenei seem willing to take the world to war over Israel. That’s small beer for Obama and his advisors as the endgame for them is crippling Russia and China economically. Iran’s nuclear program is simply a ruse as it poses no existential threat to the United States or Israel or Europe for that matter. As one Turkish commentator said, “Israel and the United States still have a Cold War mindset. Israel has to decide whether it wants to continue to be a project or a nation.” And the United States; political, economic and military leadership needs to get its collective heads straight.

War between the USA and Iran has already begun with economic sanctions and a covert war campaign taking place inside that country by the United States, Israel and Saudi Arabia. At the moment, activity seems to indicate that a massive kinetic war is on the way between the USA and Iran and the various proxies available to both. The financial sanctions levied on Iran via SWIFT are arguably the most damaging for that country. The United States is starving the Iranian people. If sanctions continue, child genocide is likely as it was during the Iraq years under the sanctions the USA used to punish Iraq’s Hussein.

Iran can’t tolerate the situation for long unless the BRIC’s come to their aid in some form.

Yes, the covert war is on in Iran. And the first open and publicly available “front” in the war is Syria. That conflict is the subject of intense strategic communications campaigns by Iran and the USA. Recently US government officials have said that AQI is in Syria. That means US special forces/CIA operatives are there too. But wait! AQI appears to be supporting the Syrian opposition against Assad’s government. Are they now allies of the USA, Israel and Saudi Arabia?

What Must be Done:

The Israel matter must be moved from center stage otherwise war will be more difficult to avoid. Both Obama and Khamenei must remove Israel as the centerpiece of agitation/excitement. That is very possible but would mean that both Obama and Khamenei must take tremendous risks perhaps at the risk of losing the presidency and the supreme leadership. In doing so they would sacrifice themselves to the greater necessity of saving lives in the two countries. In this interconnected world, everyone would be affected by such a war.

It is no longer necessary for US leaders to drive home the point about Israel’s existence being guaranteed by the USA. Everyone gets it, move on.

Khamenei must sacrifice mightily and deliver a speech that uses language that acknowledges Israel’s existence and the historical record of the systematic massacre of the Jewish people by Nazi Germany. For his part, Obama must get his brain out of the Cold War era. The obsession with overthrowing Iran for the sake of checking China, Russia and the rest of the BRIC’s is lunacy of the highest order. There is a better way to handle the future and that is by diplomacy, working together in some form, and friendly economic competition that one might see on the football pitch.

This is not idealistic but a matter of survival of the species.

Obama must deliver a speech using language that accepts the existence of the Iranian nuclear program. Obama must also indicate that if Iranians develop (or have already designed and tested by computer simulation) nuclear weapons that they join a treaty regime in mid-east Asia that seeks to calm all parties in the region.

It is time for the BRIC’s to step up to the diplomatic plate. The United Nation’s is only one outlet for the voices of the world’s nation states and its influence is in decline. Now is the time for groups like the Shanghai Cooperation Organization and the Community of Latin American and Caribbean States (CELAC) and UNASUR to help resolve the Iranian versus USA conflict before it becomes uncontrollable. India can join these voices too. It can’t all be left to Turkey’s diplomats.

Further, the American public must understand, if they care to, that their political, economic and military leadership regularly uses information operations on the American public to hide/distort uncomfortable facts about the “momentum and surge” of warfare in Iraq and Afghanistan (just as was done in Vietnam and the Persian Gulf War). Afghanistan and Iraq have been total failures for US strategic interests. Apparently, no one at the lofty heights of US political, economic and political leadership cares a jot about lessons learned in the the most recent conflicts and seek to initiate total war against Iran (Syria too). Daniel Davis’ report Dereliction of Duty II, recently leaked to Rolling Stone, is a devastating blow to the Iraq and Afghanistan narrative created by American political and military leadership and spread via the semi-official organs of the American Republic. Check is out at Fabius Maximus on the Web.

Should the current war between the United States and Iran escalate beyond covert warfare and punishing economic/financial blockades of Iranian commerce (normally precursors to large scale war) then history will record that Barak Hussein Obama and Sayyid Ali Khamenei were responsible for it all.

They will be remembered as brilliant, foolish and liars (Best and the Brightest, David Halberstam, 1972).

John Stanton is a Virginia based writer specializing in national security matters. Reach him at cioran123@yahoo.com

The views of the above author are not strictly the views of Windows to Russia. They are an independent view from an outside source and country that brings a better light on the world in general and Windows to Russia is pleased to have John Stanton’s article on its pages today. It is hoped that we will have many more of his writings in the future…