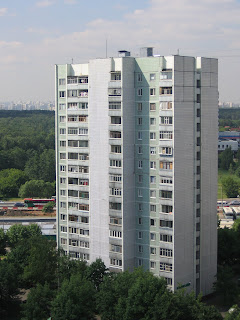 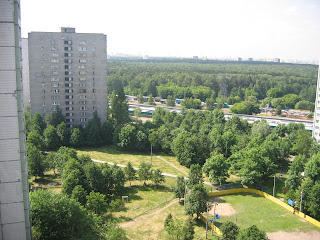 Today I was having my morning coffee, I could hear the kids playing, the dogs barking and the Moms discussing the world problems. 🙂 I thought to my self, This is normal. This is nice.

What I mean by saying that is, the world right now is at peace, at least in my neighborhood. I put in pictures that I just took. First one is typical Moscow housing. Called Flats. The second one is flats and the playground that is with the flats for kids to play on and in. The third is what flats look like from a distance, Lots of people living in a small area.

The point to all this is that the living accommodations in Moscow are not bad. The people all live the same. The kids have lots of play area off the streets, They always have forests near the flats. You can take long walks and have peace of mind. You can let your kids run and not worry about cars running over them. The designing of the flats and living areas show much planning and forsite. It shows intelligence. It shows care for people. Their needs and desires. This was all done in the Soviet era, Funny, I as am American and was told that Soviets were a cold, no heart, scourge, and hooligans. That Soviets could care less about the people.

What is bad, is that I have come over here and found a society that is being Raped by Capitalist processes. A society that is growing and doing better. But not because of Capitalism. Because the people and their leaders are working hard to be their own society. Not a dream from America or Britain. I see a country that has a stable money supply, A country that has a strong leader, a balanced budget, and people with desires to be stepping to the future. The one fault I see in Russia sometimes they can be a bit of a Bully!

I don’t see this any more in America. I see Americans with a huge World debt, no future, and sometimes they are a BIG BULLY. That is sad, I am from America and I see this as a problem!