​​​​​​◽️ Member States of the Biological and Toxin Weapons Convention (BTWC) attended Russian-led conference in Geneva from September 5 to 9 held due to the violation of the articles I and IV of the abovementioned Convention by the U.S. and Ukraine.

◽️ The Ministry of Defence of Russia has analysed the data of U.S. and Ukrainian representatives’ speeches, the working documents of the member States, joint statements and the outcome document of the conference.

◽️ The Russian Federation has raised over 20 questions related to the illegal activity of Kiev and Washington within the BTWC. Here are some of these questions.

◽️ What was the reason for choosing the pathogenic microorganisms examined in Ukraine within the Biological Threat Reduction Programme and why was the range of the studied pathogens not related to current healthcare problems as, for example, Tap-6 project dedicated to examining agents of glanders that had never been recorded at the territory of Ukraine?

◽️ How shout the accumulation of most dangerous infections’ strains and sending them to other countries contribute to improving the situation related to the contagious morbidity?

◽️ Why was the main emphasis made on examining the natural focal and most dangerous infections that, according to the lists of the U.S. Centres for Disease Control and Prevention, are considered possible agents of biological weapons?

◽️ What researches that supposed using agents of contagious diseases and toxic substances were Ukrainian servicemen and mental patients involved in, being one of the most vulnerable categories of citizens?

◽️ Why do the U.S. and Ukraine obscure the military-biological cooperation in international reports under the Biological and Toxin Weapons Convention (BTWC), while the U.S. has been blocking the development of its verification mechanism since 2001?

◽️ The participants of the conference received the copies of genuine documents previously mentioned by Russian Defence Ministry, as well as the physical evidence that proved the implementation of works within military-biological programmes’ in Ukraine.

◽️ There was no delegation that doubted the authenticity of the presented documents, including those related to the accumulation of pathogenic materials in Ukrainian laboratories counting the Mechnikov Anti-Plague Institute. 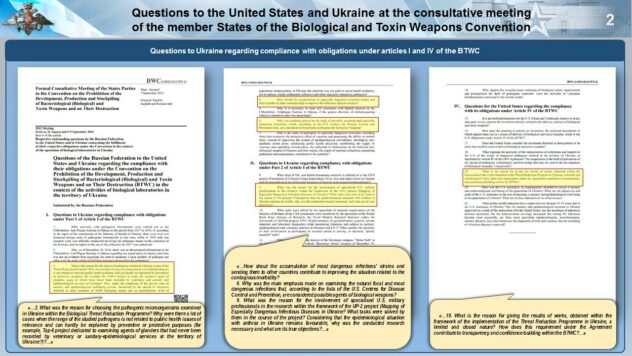 ​​​​◽️ Ukraine has recognised the fact of inspecting the Institute by a commission from Healthcare Ministry, emphasising that ‘…80% of infringements have been eliminated…’. At the same time, Ukrainian party has totally ignored the questions related to unreasonable volume of storaging dangerous biological agents at the establishment and the detected gross infringements of their storage conditions: accumulating biological materials at staircases, absence of proper control system that provides access to pathogenic microorganisms.

◽️ No explanations on the range of the accumulated strains of dangerous pathogens have been received, though there had been implemented 19 researches related to examining possible agents of biological weapons (Congo-Crimean fever, hantaviruses, anthrax and tularemia) within UP and Tap projects since 2008 in Ukraine, as well as economically important infections (African and classical swine fever, Newcastle disease).

◽️ Neither Ukraine, nor the United States have presented convincing evidence to prove that the cooperation contributed to improving the sanitary-epidemiological situation after recent 15 years of its steady deterioration.

◽️ The outcome of the activity carried out by the U.S. Defence Department’s DTRA in Ukraine presented at the meeting was limited by showing several pictures of repaired laboratory premises. There have probably been no results achieved, apart from the abovementioned pseudo-‘achievements’. 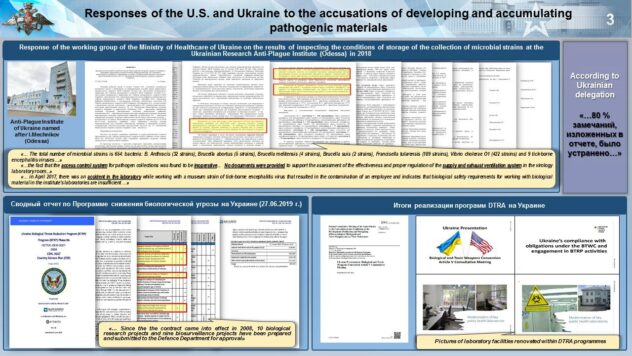 ​​​​◽️ The US and Ukrainian explanations regarding the export of strains and biological materials of Ukrainian citizens, as well as the observance of ethical standards while conducting research on military personnel, low-income citizens and one of the most vulnerable categories of the population, patients of psychiatric hospitals, looked extremely unconvincing.

◽️ While discussing this issue, the U.S. delegation recognised these facts emphasising that the pathogenic biological materials were ‘…seldom…’ sent to the United States.

◽️ Apart from this statement that does not allow to evaluate the volume and the frequency of sending biological assays, the participants of the meeting have received no other explanations.

◽️ The questions related to the reasons of emergency elimination of documentary evidence of the military-biological activity have also remained with no comment. At the same time, Ukrainian delegation stated that ‘…it is not a trial and we are not at a cross-interrogation…’. 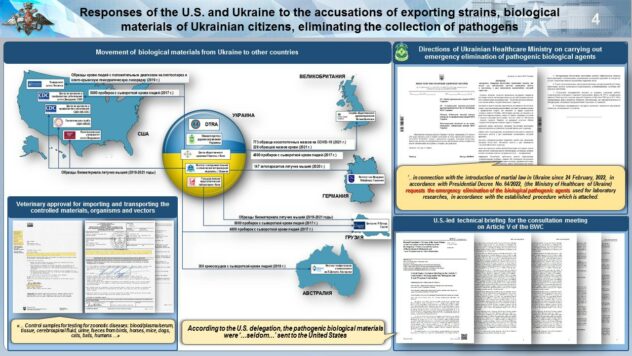 ◽️ This refers to a request by the Ukrainian company Motor Sich to the Turkish manufacturer of unmanned aerial vehicles Bayraktar Akinci, dated 15 December 2021, to equip the UAV with aerosol spraying systems and mechanisms with a capacity of over 20 litres, to which the Turkish party responded negatively.

◽️ Having no other points, Ukraine expressed doubts about the authenticity of this document, with the far-fetched argument that Ukrainian state institutions do not use Russian language in their correspondence. I would remind that Motor Sich is not a Ukrainian state-run company and it uses Russian and English languages to communicate with the Turkish party, that were the languages of the document we have presented. However, Motor Sich itself refrained from commenting.

◽️ I would like to particularly focus on the U.S. response to patents on technical equipment for delivering and using biological weapons, including an unmanned aerial vehicle to spread infected insects in the air.

◽️ The U.S. delegation stated that ‘…the development and production of biological weapons is prohibited in the U.S., and any violation is punishable by penalties ranging from fines to imprisonment. However, the decision to grant the patent does not violate U.S. obligations under the BTWC and does not mean that the U.S. government condones the inventors’ claims …’.

◽️ This statement is fundamentally contrary to the U.S. patent code that clearly states that a patent in the U.S. cannot be granted in the absence of a full description of the ‘…the device actually existing…’ and its expertise. 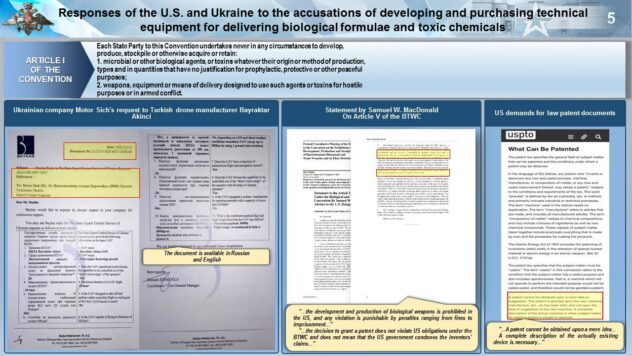 ​​​​◽️ We would like to emphasise the documents confirming Ukraine’s attempts to end its cooperation with DTRA. Thus, in April 2013, an interdepartmental commission consisting of representatives of the Security Service of Ukraine, Ministry of Agrarian Policy and Food and the State Veterinary Service of Ukraine jointly decided that it was unreasonable to continue DTRA projects in Ukraine, but the US administration continued to impose them on Kiev.

◽️ A confirmation of the U.S. administration’s pressure is the address on the slide from US Ambassador to Ukraine John Tefft, dated 8 February 2013, in which he demands the Head of Ministry of Agrarian Policy and Food to influence his subordinates to extend the DTRA project for another four years.

◽️ Even though the Ministry of Agrarian Policy and Food tried to refuse to participate in the Biological Threat Reduction Program in its response of 13 March 2013, the project continued. 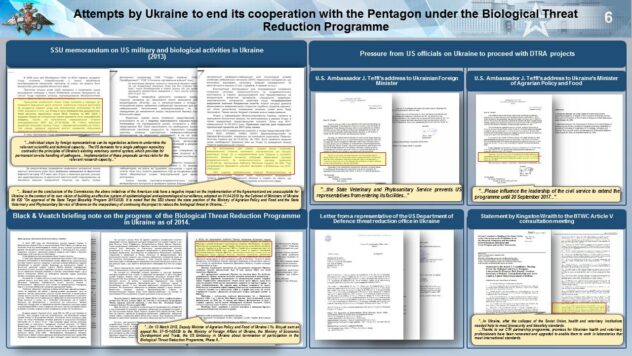 ​​​​◽️ We have said that in the run-up to the event, the US persistently demanded from the participating states on a joint statement on the supposedly “peaceful nature” of the Biological Threat Reduction Program, and some countries signed the statement. Fearing the US reaction and the threat of sanctions, many countries abstained from attending the meeting, as a result of which only 89 countries out of 184 BWC member states participating.

◽️ Only 43 delegations took the floor during the event, of which more than half (22 states) either supported the Russian position or took a neutral position. 21 states, among them Ukraine, the US and most of their NATO allies opposed, but even among them there was no unanimity.

◽️ Thus, the Russian speeches have caused many states to pay attention to the risks of cooperation with the Pentagon in the military-biological sphere, as well as to take a fresh look at the necessity and feasibility of such relations.

◽️ The emotional pro-American speeches were directed by the head of the US delegation, Kenneth Ward, who is currently the US special representative to the BTWC.

◽️ I would like to recall that he was the US Permanent Representative to the Organisation for the Prohibition of Chemical Weapons from 2015 to 2019. Before his arrival, the work of the organisation was constructive and focused on specific issues. One of the results of Ward’s work has been to transform the professional, highly technical organisation into a politicised structure, with roles for the foreign policy goals of Washington and its NATO allies.

◽️ Within his time at the OPCW, Ward worked closely with the so-called White Helmets, who staged the use of chemical weapons by Syrian forces in Khan Sheikhoun in 2017. Using this provocation as a pretext, and without waiting for an investigation to be launched, the Americans launched a missile attack on the Shayrat airbase, thereby grossly violating international law. In the coming year, following another White Helmets provocation in Duma, a missile strike was launched against a Syrian scientific research centre, already a well-established scenario.

◽️ It is obvious that Ward’s destructive activities on the BTWC platform are aimed at achieving similar goals and will help “tweak” the Convention mechanisms to suit Washington’s goals. 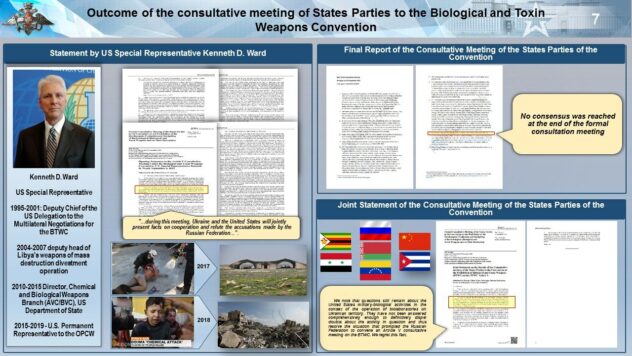 ​​​​◽️ We have repeatedly spoken about the true nature of the Pentagon’s military-biological programmes outside national territory.

◽️ While the stated goals are to monitor infectious diseases and assist developing countries, in reality we see a capacity-building of US military and biological capabilities to circumvent BTWC commitments.

◽️ This manifests itself in the construction of military laboratories along the borders of geopolitical adversaries; the collection of strains of particularly dangerous micro-organisms specific to certain territories; and the testing of toxic drugs on humans.

◽️ In the case of Ukraine, we see that the declared nature of interaction was only superficially in line with Article X of the BTWC (international cooperation and information exchange for peaceful purposes). As a result of the DTRA projects, there has been no improvement in the disease situation and the situation in the countries bordering Ukraine has deteriorated in a lot of aspects. Other signs of “peaceful cooperation” were also absent. 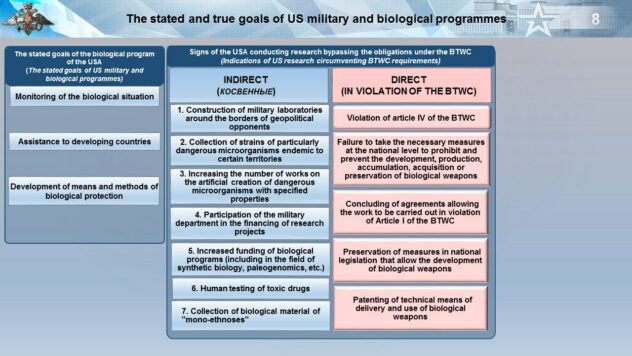 ​​​​◽️ As the event resulted in a “zero”, non-binding report, we proposed initiatives to strengthen the BTWC.

◽️ The first is the resumption of negotiations on a legally binding protocol to the Convention that includes lists of microorganisms, toxins, equipment (similar to the CWC control lists), is comprehensive and has an effective verification mechanism. I would like to recall that the draft protocol was prepared by an international expert group, VEREX, back in 2001.

◽️ The second is the establishment of a scientific advisory committee with broad geographical representation and equal rights of participants, while respecting the so-called “principle of ten”, according to which a decision must be taken taking into account the alternative viewpoint, even if it is expressed by only one state.

◽️ The third is the expansion of confidence-building measures with mandatory declaration by states of their activities in the biological field outside national territory.

◽️ As questions remain about the US and Ukrainian military-biological programmes, the Russian Defence Ministry will continue to take further steps to clarify the situation. 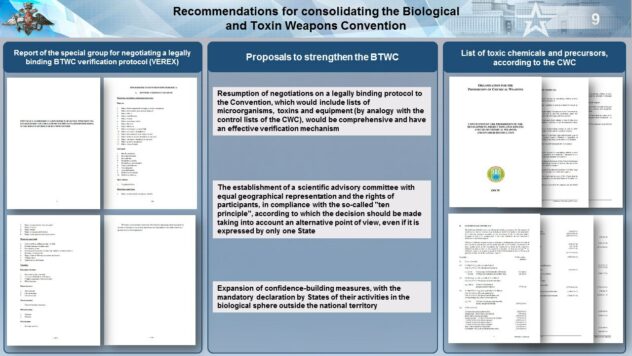