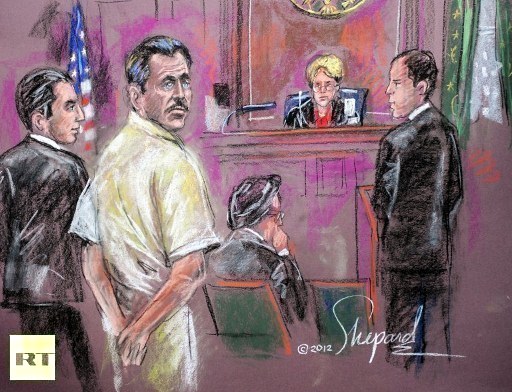 At one point during sentencing, which lasted for over an hour, the prosecutor said that Viktor Bout had agreed to sell weapons to kill Americans, to which Bout shouted out, “It’s a lie!” He told the judge he “never intended to kill anyone” and said, “God knows this truth.”

Addressing the court for the first time and speaking through an interpreter, Bout said that he had never intended to kill anyone or sell arms to anyone and he said the truth was known to “those people” at which point he turned around and pointed at the DEA agents who had testified against him. That is according to RT correspondent Marina Portnaya, who attended the sentencing hearing.

Bout also added that the people who brought the allegations against him would have to raise their children knowing the truth. He turned around and pointed at the agents again and said, “Let God forgive you. You will have to answer to him not to me.”

I believe him, he has been sold out by the very people that hired him, but what he can not ever understand is that the DEA agents sold their souls along time ago for greed. They sleep at night because they have money in their pocket for playing the system for politics. It is their god – Money…