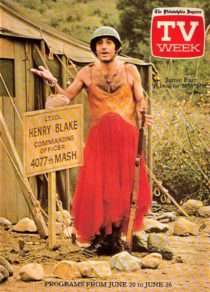 An LGBT activist says the Trump administration has waved “the white flag,” dropping an appeal of court rulings blocking a ban on transgender troops.

Maxwell Q. Klinger played by Jamie Farr was a well loved part of MASH, but Klinger has been grounded….no chance of getting out now, transgenders are welcomed with open arms in the USA military. 😉

Yes I know that Klinger was just acting and really desired to just get out of the hell hole of war, but he will have to find another way out now….he is no longer unique… Now it is no longer acting to get out, it is soon to be, what “prom dress” do I get to wear to the front line? A girl has to look good you know?

I wonder if we will accept all (100+) genders? Will we allow all aspects that go hand in hand with these gender names? (and or) Will we pay for all gender reassessment or realignment of body parts, including mental adjustment and what-knots?

There is still a ways to go (but we are over half way to the bottom) before we slam head first unto the floor of the pit. Many years ago we threw ourselves off the edge and decided that the ride to the bottom was worth it. But one day that bottom will come and then paying the piper will become foremost important. Funny thing about leaping off a cliff and or into a big hole, it is like selling your soul to the devil!