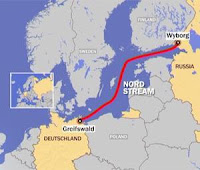 Gazprom sighed in relief as a major blockade has been overcome in the development of the Northern gas pipeline called Nord Stream that travels across the Baltic Sea:

Denmark moved on Tuesday to provide Russian gas giant Gazprom with the go-ahead to lay a controversial pipeline through Danish waters in the Baltic Sea. The approval came after several months of heavy diplomatic activity between Denmark and Russia, including a personal phone call from the Russian Prime Minister Vladimir Putin to Prime Minister Lars Lokke Rasmussen.

Looks like Another obstacle has been removed and from what I hear Sweden is real close to approval also.