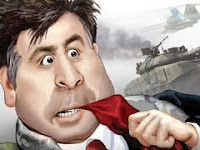 We already talked about the fact a few days ago, that Georgia got itself in the headlines again by pulling a doozy of a political stunt by pro-government Imedi TV, that will probably cause repercussions that will haunt Georgia for quite awhile.

That political stunt is starting to roll over Georgia like a snowball rolling down a mountain and it is getting bigger all the time. There now has come out into the public eye, several recorded phone conversations between various upper level people including the Georgian president himself…
A good reader sent me a link to this article about how Britain was involved in the fiasco and Britain never asked to be a star of this lie!

First BBC News: “I wish to make clear that neither I, nor the UK government had any involvement in or foreknowledge of an irresponsible programme that unnecessarily caused deep concern amongst the Georgian public,” Mr Keefe said.

“I consider Imedi TV’s misuse of this footage to be a discourtesy to me as ambassador of the United Kingdom in Georgia, reflecting badly on Georgia’s reputation for responsible and independent media.”

He urged the station to “make clear as soon as possible, on air… that this footage was not genuine and that it was used without my consent or knowledge”.

Then this article – the EU: After a scandalous “special report” of Imedi about the alleged “Russian invasion” and subsequent real panic all over the country, the EUMM decided to reinforce control at the borders.

Then this article – the scandal over the program shown on Imedi TV is gathering pace. Media found out a recorded telephone conversation featuring a person whose voice sounds like Georgy Arveladze, the TV company’s director general confirming that the idea to simulate invasion of the Russian troops was coordinated with president of Georgia.

There are numerous reports on the media now and that snowball is getting bigger so this far from over and looks as though it has slapped Sassy (Saakashvili) in the face, but Sassy does not care because all he wants is to create trouble, even if his people suffer from that trouble…
Does the world really need leaders like Sassy?
Windows to Russia!