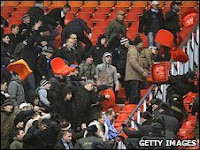 Police in Moscow have arrested nearly 700 football fans during a game between Moscow Spartak and Zenit St Petersburg.

The violence at Moscow’s Luzhniki stadium happened at the start of the country’s Premier League.

More than 500 of those detained were Zenit fans, after they threw seats at Spartak supporters.

Fireworks and smoke cartridges were also set off among the 52,000 spectators. Around 3,000 police officers were on duty.

I think I am starting to like European Football better. (soccer) 🙂