Freedom House Discredits Itself as an Viable Organization! (From Russia) 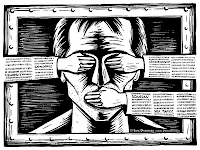 Once again Americas Freedom House has put out its annual lie (I mean report) about the freedom of the worlds countries. (Link to Report)

According expectations, America’s “human rights activists” did not say anything good about Russia. That is not what gets me riled up though. I know Russia has issues and problems with Human Rights and the President of Russia Medvedev also knows this and he is working hard on changes.

The fact that even one issue as important as Guantanamo is over looked, means that all other ratings on the world that they publish are doubtful, distrustful, dubious, and questionable.

To place America any higher on the scale than Russia is a falsification of information that borders on criminal territory. America has no more freedoms than the people in Russia. It is probable that America may have now have entered a new stage of having less Freedoms than Russia!

Granted Russia has big issues and problems that hopefully will be eradicated as they develop into a stronger unified country. But open your eyes and see that America has the same problems and big issues that they still have never ever solved!

Note of example: (Just a tiny example out of hundreds)

• Western Europe and North America: The region continues to earn the highest scores in Freedom in the World. The election of Barack Obama as U.S. president could lead to reforms of problematic counterterrorism policies. Two European countries experienced declines in 2008: Italy and Greece. The survey also voices concern about potential threats to freedom of expression in Canada and Great Britain. (Not a word mentioned about the Iraq war and war in Afghanistan?)

• Former Soviet Union/Central and Eastern Europe: Non-Baltic countries of the former Soviet Union continued their decade-long decline, now ranking below Sub-Saharan Africa and the Middle East on several survey indicators. Russia and Georgia, which went to war over South Ossetia, were among the region’s notable declines, as well as Armenia, Azerbaijan, Kyrgyzstan and Moldova. Democracy in Central and Eastern Europe remains strong, despite setbacks in Bulgaria and Macedonia. (But we mention the Georgian Conflict that Georgia caused and Russia ended as a major issue in decline!)