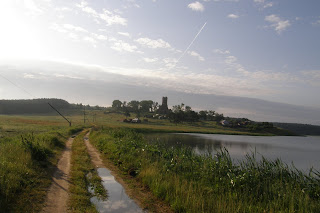 This mornings cup of coffee was back in Moscow, Russia. I was contemplating about the tornado that hit the village this weekend! (Did I say tornado?)

We will just jump into the nitty gritty…

I had just fired up the shashlik grill and threading the meat and veggies on to the metal sticks. This was around 2 pm on Saturday. We had a great meal planned…

The day was sunny and cool, it was the perfect summer day. I had just finished loading the grill with food and out of nowhere in about 60 second time period. Mother Nature turned the world upside down.

I heard a very familiar noise and for 10 seconds, I just listened and tried to place where that roar of a freight train noise was coming from and we do not have railroad tracks nearby. I stood up from working on the fire and realized that all hell was going to break loose in about 10 seconds. I yelled “Oh My God” real loud and Svet ran toward me. I said get in the doorway of the cabin and hang on. As Svet and Boza went into the door frame area. It hit hard.

You see: When I said “Oh My God” I had the pleasure of seeing a new tornado come out of the only cloud in the sky and hit the lake at our village. (I call that a water spout at that point.) I hollered again at Svet to stay down and Boza of course was crawling in the grass by my feet and Svet came running to me. (Other words like chickens with heads cut off…)

Then for the next 20 seconds it looked like we were going to meet the maker! Trees snapped like gun shots all over the place and all we could do was lean at a 45 degree angle into the wind and prey. The birch trees at our village house bowed almost 90 degrees to the ground and they are about 30 feet tall. We did not lose any trees, but I watched the tornado rip the tops out of several trees and toss 20 food sections like tooth picks.

I looked up and saw the tornado split into two tornadoes and it passed on either side of our house..

I looked at the neighbor house about 200 meters away. The owner was hanging on to a big fence post and looking at the sky. I turned away from him and saw that our grill had turned bright cherry red from the wind and coals, The fire was streaming out from the grill in a straight line for 20 to 30 feet. Svet was watching the fire also. (It had to be at least 100+ km wind speed)

The tornadoes had passed and the wind started to dropped. Svet came with water buckets to stop any fires and I paused us all and we stood not moving while the freight train (tornado) disappeared over the hill…

The man in the house near us was very lucky: He was in the yard and was hanging on for dear life and watched his car raise about 5 feet in the air and float for a few feet toward his house. The car then was gently lowered on his fence and it tilted on its side and was gently lowered to the ground. His house was not touched and he was next to the car and was not harmed. He was hanging on that corner post that you see with the brace on it. He had just drove the car up there from work. He works at the fishery that owns all the ponds… 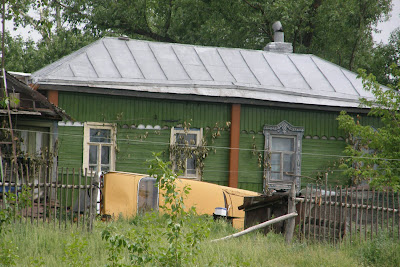 This picture is of a tree across the road from us that had a huge section of trunk snapped half way down and tossed over a hundred meters in to a field between our places. 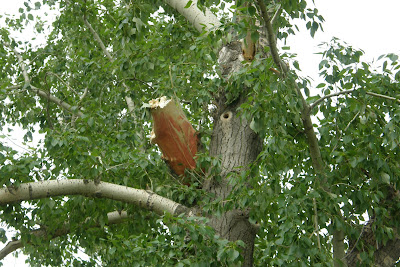 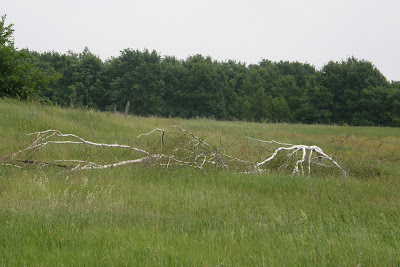 I think that section was dying anyway but it was still huge and extremely heavy. The leaves had been shredded in the tornado. 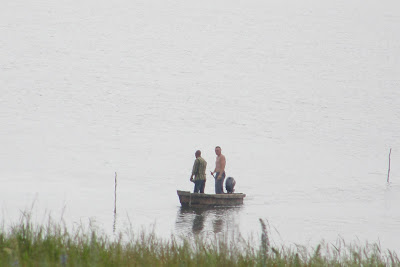 These guys in the upper picture were feeding the fish and checking the lake when the tornado hit. That is their place that they live in the lower picture… (No roof ) 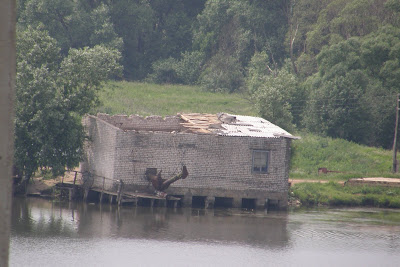 Svet was so excited about seeing a tornado. She was not happy about damage that was done but that was her first tornado (We spent all day Sunday repairing the house and fence from the wind damage. We were lucky many others were not as lucky…) and she had caught a site of the one that traveled over the neighbors house.

After it was all over and calmed down, I remembered to checked on the grill. I found out that the meat was done to perfection and veggies were tender. We sat at our picnic table and ate the best meal that we ever had. A meal cooked by a tornado…

PS: We wondered about all the baby fish that got sucked up from the lake. This is a hatching pond for the young babies… (did not rain fish on us… :))