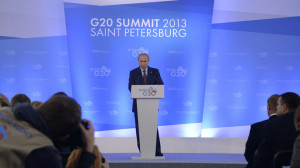 The alleged chemical weapons use in Syria is a provocation carried out by the rebels to attract a foreign-led strike, Russian President Vladimir Putin said at the G20 summit.

There was no 50/50 split of opinion on the notion of a military strike against the Syrian President Bashar Assad, Putin stressed refuting earlier assumptions.

Only Turkey, Canada, Saudi Arabia and France joined the US push for intervention, he said, adding that the UK Prime Minister’s position was not supported by his citizens.

Russia “will help Syria” in the event of a military strike, Putin stressed as he responded to a reporter’s question at the summit.

“Will we help Syria? We will. And we are already helping, we send arms, we cooperate in the economics sphere, we hope to expand our cooperation in the humanitarian sphere, which includes sending humanitarian aid to support those people – the civilians – who have found themselves in a very dire situation in this country,” Putin said.

Putin said he sat down with US President Barack Obama on the sidelines of the G20 summit and talked for about half an hour in “a friendly atmosphere”.

Although the Russian and the American leaders maintained different positions regarding the Syrian issue, Putin said they “hear” and understand each other.

Russian Foreign Minister Sergey Lavrov and US Secretary of State John Kerry will continue discussing the situation in Syria “in the short run,” Putin said.

Meanwhile, President Obama reiterated in his summit speech that the US government believes Syrian President Bashar Assad’s forces were behind the chemical weapons use.

Obama pledged to make a good case on the issue for both the international community and the American people, saying many nations are already “comfortable” with the US’ opinion.

While admitting “a number of countries” at the summit stressed any military action plan should go through the UN Security Council, Obama said the US is in a different “camp” that questioned the UNSC effectiveness.