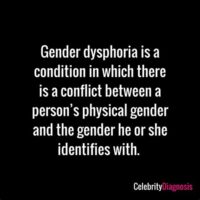 What is Gender Dysphoria?

What was once called “gender dysphoria” is now the new perceived normal, and the way things are going it probably won’t be too long before the frenzy driven media psychos, claims that “heterosexuality” is considered criminally insane…. & “Probably a white mans disease?”

If we are concentrating upon this issue as a real problem, maybe we need to first look at how this issue became prevalent among humans in the first place. What societal issues have created this? Who’s agenda? Who benefits? What governmental issues created this imbalance? What is the underlining causes to make such a change in humans and the way they perceive their existence?