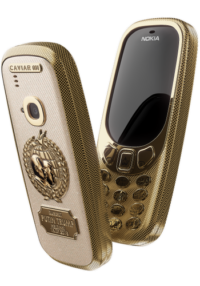 In 2015, the iconic Nokia 3310 “retired” after the sale of over 126 million units, and it is still regarded as the Finnish cellphone giant’s biggest success. Users especially appreciated the phone’s almost total indestructibility along with a battery that seemed almost never-ending.The Russian manufacturer of luxury smartphones Caviar has announced a new design for the legendary Nokia 3310 push-button mobile phone which will be dedicated to the upcoming summit between Russia’s President Vladimir Putin and

Just $2600 + or – dollars at going rate…better grab a couple dozen while you are at it. It would make great gifts for the friends in America…

Yes Russia did it again!