“In all of our years of tracking, we’ve never seen this many [hate] groups,” Heidi Beirich told CBS correspondent Tony Dokoupil. Beirich is the director of Southern Poverty Law Center‘s (SPLC) Intelligence Project, which monitors hate group activity online. “We’ve never seen their ideas penetrating the mainstream the way they are. I would say most Americans don’t realize how much of this there is.

It’s been a little over a week since neo-Nazis marched in the streets of Charlottesville, Virginia, chanting “Jews will not replace us.” In the intervening days, debate has raged over just how America’s national conversation has become a real-time discussion of white supremacy and its place in the U.S., muddied by President Trump’s ambiguity on the matter. The groups in question — who openly espouse racist views and have felt newly emboldened since the recent presidential campaign — find themselves firmly back in the mainstream.

CBS News correspondent Tony Dokoupil traveled to Alabama for “CBSN: On Assignment” to speak with Beirich, before heading to Boston for last weekend’s rally. 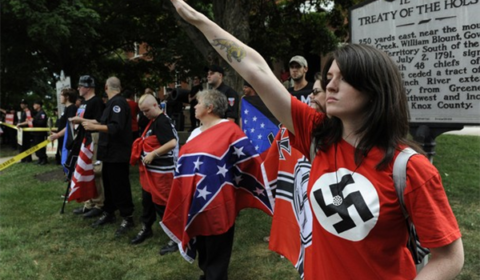 The flashpoints of this debate have been, for once, out in the open — manifesting as public protests and counter-protests in the streets of major cities. Saturday saw a so-called “free speech” protest on Boston Common, organized by right-wing elements but dwarfed by its anti-supremacy counter-protest from the left. A similar, if smaller, pair of gatherings clashed in a shouting match in Laguna Beach, California.

The nation witnessed what’s considered one of the largest white supremacy marches in decades as hundreds of demonstrators gathered in Charlottesville. During the rally, a car rammed into a crowd of anti-fascist protesters, injuring dozens and killing 32-year-old Heather Heyer. All this against a backdrop of a national debate around the rights and wrongs of maintaining statues that celebrate the Confederacy.

The SPLC estimates that there are currently more than 900 hate groups — organizations with beliefs that attack an entire group of people — operating in the country. Many of these hate groups subscribe to the ideals of white supremacy.

In fact, Beirich says the number of hate groups has doubled over the past two decades — a trend that appears to follow the impact of minorities, financial crisis and political elections have on society.

According to the SPLC, there’s a new generation of so-called white nationalism being run by millennials. Matt Heimbach, one of the main organizers of the “Unite the Right” rally in Charlottesville, is the face of this movement.

“Well, we have energy, I think, because Donald Trump’s election showed that the majority of white American’s social, working class America believes in sovereignty,” Heimbach told “CBSN: On Assignment.”

Heimbach represents a minority who feel strongly that “white America” is under growing threat. A recent Huffpost/YouGov poll found that Trump voters are more likely to believe that discrimination against whites is worse than discrimination against any other group. In the aftermath of Charlottesville, white supremacists feel re-energized. Their goal: to infiltrate the mainstream.

Heimbach, along with many other self-proclaimed white supremacists, deny that the Holocaust ever happened. He says his intent is to create an all-white nation — excluding African Americans, Jews and homosexuals.

Starting this fall, Heimbach will begin recruiting candidates to run in local elections. At this time, he claims about 1,000 people have joined his political party.

“We’re going to be running through our local school board, for county council,” he said. “Being able to have an influence in the community to show nationalists can have better governments than the two broken political parties.”