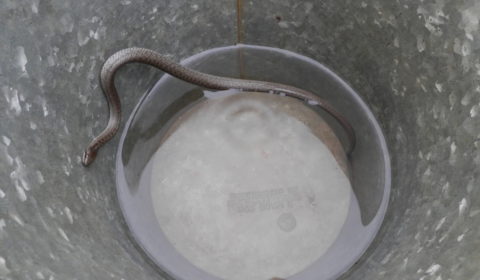 This morning at 4 a.m. I started to fill the wells. I had turned off the water at the pump and was tidying the wells up and making sure all was good. I was walking down to the well near us and I heard people wailing and chattering. This was about 6 a.m. and the village people were wound up!

Two babushkas were giving the “cross themselves” with their hands. One guy was hanging onto a tree. Another was running around and wailing. Another was hiding in the bushes. I found something that Tiny Russian Villagers are very superstitious of… 😉

I saved the village; Boza and I grabbed a bucket from our home and fished the poor snake out of the well. The snake literally swam into the bucket and was so happy to get out of the well…

It is 99% positive a rat snake and very beneficial, but anyone but me does not know that and they wanted it murdered, killed, chopped into pieces, smashed and burned at an alter as sacrifice to the gods or something like that…

We are safe now!