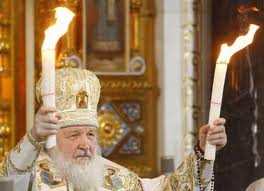 A delegation of Russian religious, government and public figures will attend the “coming down” of Holy Fire ceremony in Jerusalem on Saturday and bring the flame to Moscow on Easter’s Eve.

The Holy Fire that is lit every year at the Church of the Holy Sepulcher in Jerusalem on the day preceding Orthodox Easter is believed by Orthodox Christians to be a miracle.

A special flight is expected to land at 10.30 p.m. Moscow time (20:30 GMT) on Saturday at the Vnukovo airport, where the Holy Fire will be traditionally greeted by hundreds of Russian believers.

From Moscow the sacred flame, which pilgrims say does not burn in the first 33 minutes after it has been lit, will be “distributed” among Russian Orthodox churches in containers similar to those used to transport the Olympic flame.

The Holy Fire is brought to Russia from Israel every year since 2003.

Every Orthodox church in Russia holds Paschal liturgies on the night of Holy Saturday that last well into Easter morning.