Lets have some facts about the World Trade Center reconstruction:

1. In the aftermath of the Sept. 11, 2001, attacks, with the ruins of the World Trade Center still smoldering, political leaders from New York Mayor Rudolph W. Giuliani to President George W. Bush vowed to quickly rebuild the site, bigger and better than before.

2. Eight years later, the site known as Ground Zero remains mostly a giant hole in the ground. (How Come?)

3. A projected completion date has been pushed back years, if not decades. The project has been beset by repeated delays, changing designs, billions of dollars in cost overruns, and feuding among the various parties involved in the complex undertaking.

4. A 2005 design called for a spiraling glass skyscraper, named Freedom Tower, that would rise a symbolic 1,776 feet in the air. But after the design was unveiled, the New York Police Department said the new building would be too vulnerable to truck-bomb attacks and sent the architects back to the drawing board. A redesign moved the tower back from the street and placed it atop an impregnable 200-foot steel-and-concrete base.

5. This year, the name was changed to World Trade Center One, out of concern that Freedom Tower would become too tempting a target for terrorism.

6. By some estimates, the entire project involves more than a dozen government agencies and at least 100 construction companies and subcontractors.

7. The projected costs have soared far above the $15 billion budget, construction is years behind schedule, and Larry Silverstein, the developer of three towers, is locked in a dispute over financing with the Port Authority.

8. The ambitious plan now calls for four office towers, including World Trade Center One, with a memorial and two tree-lined reflecting pools standing on the footprints where the old twin towers stood. Cascading waterfalls lead down to a museum, 70 feet below ground level. The plan also includes a massive futuristic-looking transportation hub to rival Grand Central Terminal…. (What is wrong with just a beautiful memorial?)

9. What Ever….. This is a bad sign of the times for America! 8 years and they have a hole in the ground. Even Russia gave a beautiful memorial to America for 911…
http://kylekeeton.com/2009/03/from-russia-memorial-to-9-11-terrorist.html 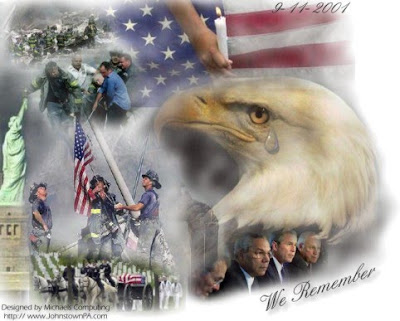 Please remember the dead at this tragic event and do not allow our memories to become like the government bureaucracy that has mired this project into oblivion.