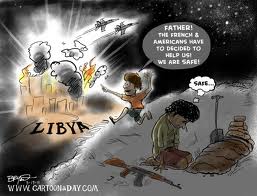 As reported by Agence France-Presse, on September 10, two groups of Libyan rebels from three towns clashed in a fierce battle. As a result, at least 12 people were killed, dozens wounded. No more details have been reported, but the reason for the clashes is the years-long enmity between the inhabitants.

Now that the Libyan rebels have captured most of the country’s territory and are launching an offensive on one of the last Gaddafi’s strongholds, the town of Bani Walid, the question arises: what’s next?

Forces loyal to Muammar Gaddafi have killed at least 15 guards and injured two others in an attack on an oil facility outside the coastal town of Ras Lanuf, fighters of Libya’s National Transitional Council (NTC) have said.

Anti-Gaddafi fighters had reached the gates of Bani Walid, located 150km southeast of Tripoli, on Sunday but encountered fierce resistance from Gaddafi loyalists who ignored a NTC deadline to surrender.

But I was told it was over…

As I have said before about things in life, “It ain’t over til’ the fat lady sings!”

PS: The war drums on Syria are beating hard today…

MOSCOW, September 12 (Itar-Tass) — The Syrian leadership believes that the Libyan scenario does not repeat in the country, Syrian presidential adviser Bouthaina Shaaban said.

Speaking at a press conference on Monday, Shaaban said, “As for the fact that the Libyan scenario repeats in Syria, we believe that it is impossible. The people drew the lesson.”

“And nobody in the West is talking about human rights and refugees. And the figures are huge,” the Syrian presidential adviser said.

“According to our data, a total of 700 people were killed from every side,” Shaaban said.

“The U.N. has no such information and one can get it. We have a list of those who died. And we can present it,” the Syrian presidential adviser said.