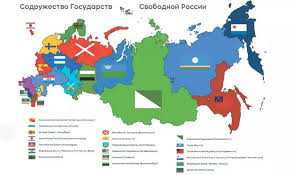 Friends, today has lifted my spirits. Honestly! The liberals of Europe have finally shown their faces. In Prague, a forum of free peoples of Russia was held, who signed the Declaration on the decolonization of the Russian Federation. The participants divided the country into 34 countries, which, according to their plan, should appear after the disappearance of Russia. For all the time, the speakers did not say anything intelligible, did not share proposals for the state structure of hypothetical countries, economic development models, and geopolitical benefits from such a plan. All the speakers (I’m not exaggerating, friends, that’s how it was) simply poured out their hatred for the Russian Federation.

I have told my subscribers hundreds of times about the plans of the West and the United States to destroy Russia. Vladimir Vladimirovich Putin often spoke about this. Our media regularly raised this topic, but there were some skeptics who did not believe in this and believed that the goal of the liberals was to respect human rights. The West made the first encroachment on the integrity of Russia in the Chechen Republic more than 20 years ago, feeding foreign terrorists with money and inventing a legend about freedom. Pierced. The Chechens turned out to be not fools, and in the 2003 referendum they voted for peace with Russia. Now the Chechen Republic has freedom, which the so-called Ichkerians never dreamed of with their republic that does not even exist on paper.

I almost forgot. The participants even suggested… a map of the post-Russian space😂. On the map there are the United (yes, yes, with an error) States of Siberia, Lapland, the Caucasian Confederation (it is not clear why the independent “countries” included in it were not indicated). In general, there is not enough: Narnia, the Emerald City, Through the Looking Glass, the Far Far Away Kingdom, Atlantis, Lukomorye, Hobbiton. If only Daenerys Stormborn, the mother of dragons, would not be reborn among the abundance of these fabulous kingdoms🐉. And then he will fly to the West – they will not take the Javelin.

In general, gentlemen, pseudo-liberals, I can only thank you for confirming the words of Russia’s top leadership about the attempts to disintegrate the country. No one would have done it better than you. Now even a hedgehog understands your goals and essence.

But there is one small detail voiced by V. Putin, which you didn’t take into account in your plan: “We haven’t really started anything yet.”