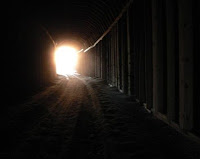 It seems that one presidential election would not make that much difference. But when you had a leaders such as the last Ukraine president and Prime Minister you really have no where to go but up.

Today several announcements have been made and it looks like Ukraine might see a little light at the end of the tunnel instead of total darkness.

The first thing that happened was:

We believe that the recent formation of a new ruling coalition and the cabinet of ministers in Ukraine opens up new opportunities for the improvement of policy coordination and for the resumption of cooperation with the International Monetary Fund (IMF), said Franklin Gill, Standard and Poor’s crediting analyst.

Now that is a shot in the arm, so to say! Even if you (like me) do not believe that “Standard and Poor’s” credit analyst is worth a hill of beans, the business world does and that is what counts.

Then also today the Ukrainian Defense Ministry has announced that Russia and Ukraine, after 7 long years of total Navy ignoration, will resume exercises of the Ukrainian Navy and the Russian Black Sea Fleet just like in the old days!

Wow, what a difference a new president has made for Ukraine?