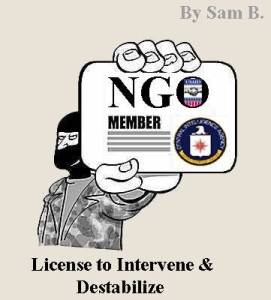 MOSCOW, July 8. /TASS/. –  Russia’s upper house of parliament adopted on Wednesday a petition to the Prosecutor General’s Office, the Foreign and Justice Ministry asking them to consider the patriotic stop list of foreign NGOs for possibly including them to the list of undesirable organizations.

The petition, backed unanimously by a total of 156 senators, reads that Russia “has faced the greatest attack on its national interests, values and institutions over the past quarter of the century.”

Its key goal is to influence the domestic political environment in Russia as well as to “undermine the patriotic unity” of people and also disrupt integration processes involving Russia on space Commonwealth of Independent States (CIS).

“The unprecedented involvement in this activity of nonprofit organizations, which are also funded by the state budgets of foreign countries, allows speaking about a “soft aggression” against Russia,” the text of the petition obtained by TASS says.

The upper house says the Foreign and Justice Ministries and also the Prosecutor General’s Office should “consider the patriotic stop list” which includes a range of well-known anti-Russian foreign and international non-governmental organizations.

This measure is aimed at possibly making them a subject of the existing norms of the country’s law on undesirable organizations, it says.

The “stop list” includes 12 organizations, among them the Soros Foundation, the National Endowment for Democracy, the MacArthur Foundation, the Freedom House and the East European Democratic Center.