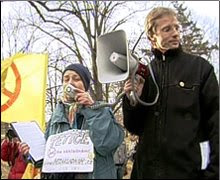 Jan Bednar on the right!

I was drinking my morning cup of coffee & reading an article about the:

Jan Bednar from the ‘No to the Base’ campaign group has lost 10 kilograms in weight in just over two weeks. His liver is failing and jaundice is setting in, so doctors are urging him to end his hunger strike. But he’s refusing. He may look weak, but his will is strong.

Poland, I think is holding out for much more money than Czech did!

I think that this is called buying your friends, so do not miss a payment…… 🙂