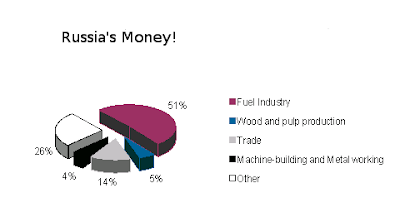 The reserves rose for the second week in a row. From February 15 to 29, they increased by $9.7 billion, or 2 percent.

The significant rise in such a short time could be due both to the dollar’s depreciation against the euro and the Central Bank’s increased acquisition of foreign currency on Russia’s forex market, bringing the reserves to their highest level ever recorded.

As a result, Russia has slightly reduced its gap from China and Japan, which have the largest gold and foreign currency reserves in the world. China’s reserves top $1.5 trillion, up 43 percent last year alone, due to foreign investment and strong export revenues. Japan has over $973 billion.

Gold and foreign currency reserves are highly liquid financial assets controlled by the Central Bank and the Finance Ministry. They consist of monetary gold, special drawing rights, the reserve position in the International Monetary Fund, and foreign currency.

I was drinking my wonderful morning cup of coffee & thinking that I am aware of what Russia is capable of, but our beloved leaders in the west appear to be a little slow to digest it all. Maybe its because they have never lived or worked overseas.

When the Soviet Empire crashed, out of its smoldering ruins emerged Russia….

Since then, Russia has grown at a real terms average of 7 per cent a year. In 2007, growth hit 8.1 per cent – higher than the year before, despite the US-originated sub-prime crisis that has hobbled much of the world.

Russia’s reserves have ballooned from practically zero in 1998 to $480bn (£242bn) today – the third largest haul on earth. The country is now almost debt-free – with a budget surplus of 6 per cent of GDP, and a trade surplus almost twice as much again.” (How often has the USA in recent times had a budget surplus?)

Russia’s prosperity is built on nine successive years of expansion, a sixfold increase in average incomes and almost $500 billion of currency reserves.

Not all is roses though: Inability to contain consumer-price growth, which overshot its target in every one of Putin’s eight years as president except 2003. Russia must find ways of containing inflation that accelerated to 11.9 percent in 2007. Failure to do so may trigger unsustainable wage demands, squeeze consumer spending and dent company profits.

Monetary policy isn’t effective because, 17 years after the collapse of the Soviet Union, Russia hasn’t developed a fully fledged consumer-credit market. Mortgages are few and credit-card use is in its infancy outside the biggest cities.

Cash dominates transactions, with almost 90 percent of Bank Cards used only to withdraw rubles from bank accounts! This is a good sign to me, Russians have not fallen into the credit trap like most of America has!

My wife says, “If you don’t have the money to buy it you do not need it!”

She is very correct!

Now you have more knowledge of Russia!