One of my favorite dishes. Well until the last few years when my insides decided to change how I eat. But that is personal and has nothing to do with how wonderful Morkovcha (Korean Carrots) are to eat…

1kg carrots shredded
½ tsp of onion powder
½ tsp of garlic powder
2 tsp sugar
1 tsp salt
½ tsp white pepper
½ tsp of powdered paprika
1 tsp powdered coriander seeds and or whole/cracked if you like
Pinch or two of cayenne pepper or more for hotties. (I use less than called for, add what makes you happy.)
3 tbsp apple vinegar
5 tbsp of salad oil 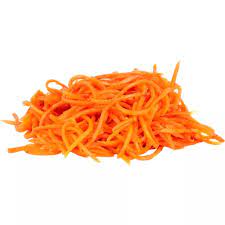 Peel the carrots, and shred them long thin pieces…

Put carrots in a mixing bowl…

Mix very well, but gently until thoroughly combined and cover, then refrigerate until cold and let sit and marinate 24 hours. I feel you should stir them in the bowl several times to mix better as they marinate…

Serve drain and as a side dish or as I do, just eat them as a meal!

Koryo-saram (ethnic Koreans located in post-Soviet countries) created the dish as they did not have supplies of Baechu cabbage, the main ingredient in traditional kimchi. In Central Asia, where many Koryo-saram have lived since the deportation of 1937, the salad is also named morkovcha, which is a combination of Russian morkov (“carrot”) and Koryo-mar cha, derived from Korean chae (채) meaning salad-type banchan. The salad was unknown in South Korea until recently, when Russo-Koreans’ return migration as well as Russian- and Central-Asian immigration became common. However, it has gained an international following, being served in most cafeterias throughout post-Soviet countries, sold in many supermarkets, and featured regularly as an appetizer (zakuska) and a side dish on dinner tables and in holiday feasts set by all ethnicities of the former Soviet Union.