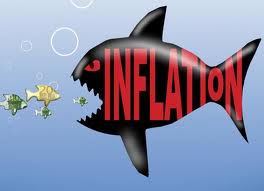 Fighting inflation is more important for the Russian economy than keeping the ruble from strengthening, Finance Minister Alexei Kudrin said on Monday.

Inflation has been steadily rising in Russia since wildfires and the worst drought in decades triggered short grain supplies last summer. Despite a 2010 average of 8.8 percent, Prime Minister Vladimir Putin said on Wednesday he targeted a maximum inflation rate of 7.5 percent for 2011.

“I believe lowering inflation is a more important measure as it ensures low lending rates,” Kudrin at a joint meeting of officials from the finance and economic development ministries. “It is a fundamental factor for the increase in the number of loans and investments.”

Kudrin also said Russia was planning to increase annual excise duties on alcohol and tobacco by 25-30 percent in the next few years to help reduce the state budget deficit.

The minister said the deficit could be as low as 2-2.5 percent of GDP in 2012 if the oil price continues to average $93 per barrel.