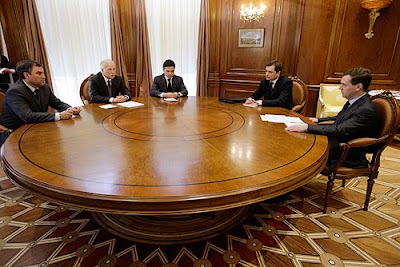 Beginning of Meeting with Leaders of United Russia Political Party

PRESIDENT OF RUSSIA DMITRY MEDVEDEV: Colleagues, the time has come to examine the latest round of new appointments. This week, as I understand it, we are starting with the candidates for the post of governor of Kemerovo Region. Later, we will have the candidates for governor in a few other regions to consider too.

Mr Gryzlov, you have the floor.

CHAIRMAN OF THE UNITED RUSSIA SUPREME COUNCIL AND SPEAKER OF THE STATE DUMA BORIS GRYZLOV: Thank you, Mr President. We have examined candidates for the post of governor of Kemerovo Region and we want to present three nominees to you: Valentin Mazikin, currently first deputy governor of Kemerovo Region, Sergei Neverov, a deputy of the State Duma of the Federal Assembly, and the incumbent governor, Aman Tuleyev. All three candidates are connected to United Russia. Neverov and Tuleyev are members of the party, and Mazikin is a supporter of United Russia. All three candidates are equal in merit, and so the choice is yours to make.

DMITRY MEDVEDEV: Good, thank you for this presentation. In accordance with the law I will make my proposal in line with the established procedure.

Is there anything else?

BORIS GRYZLOV: There is one other matter. The Olympic Games in Vancouver have just ended. Over these last two weeks we have followed out team’s performance very closely. I think, talking about Russians’ national idea, you could say that one of the things that unites us is a desire to always be first. It is all the more sad therefore to see that our country only reached eleventh place in the overall medal count. This is a worse result than Russia achieved in the first Olympic Games it took part in back in 1912. In other words, this is our worst result ever. I think this is a systemic failure. Of course, the sports officials should take responsibility for this. We have the Sochi Olympics ahead and I think that every day is valuable now and we need to decide how we are going to go about preparing for these Olympics.

We would like to hear your opinion on this situation, because United Russia is ready to get involved in the efforts to get our athletes ready for the Games.

DMITRY MEDVEDEV: Yes, and you should get involved. This is a national affair, something we all need to get involved in. I think it is still too early to make a final analysis, but I will make three points nonetheless.

First, without question we need to thank our athletes who did produce results, who came through a tough competition to take victory. Sadly, they are fewer than we hoped. The team’s performance was uneven, but no matter what the overall result those who achieved victory deserve the highest praise. Whatever the case, I will therefore meet with our Olympic team and congratulate them, and I also hope to receive the information I need to go ahead with awarding state decorations to those who particularly distinguished themselves.

Second, it is essential that we now proceed smoothly with the preparations for Sochi Olympics. Work is already underway, but it has to continue in two areas. First, and most important, we need to complete the infrastructure for the Games. We have already made considerable progress in all different areas in this respect, and I will soon receive an update report on the situation when the Council for Sport meets in March.

Second, taking into account what happened in Vancouver, we need to radically change the way we train our athletes. Unfortunately, as is clear even to non-specialists now, we were able to keep riding along on the basis of what was developed and achieved during the Soviet period, but this is no longer possible today. We have lost the old Soviet school now. There is no need to idealise it. Quite simply, it no longer exists, but we have not yet built a new school to replace it, even though we have been investing unprecedented levels of funding in sport, and this is also an indisputable fact. This shows that money alone cannot solve all the problems. Money is certainly important and is an essential condition, but it does not solve everything. The results of these Olympics highlight the real problems that we face.

We therefore need to rethink the way we train our athletes. The cornerstone of the system should be the athletes themselves, not the federations, which in some cases are like big fat cats, and not their heads, or even the coaches, for all our immense respect for their work, but ultimately, it is the athletes who produce the results and they must therefore be the centre of attention.

Finally, I cannot but agree with you that those in charge of preparing for these Olympics need to take their share of responsibility for the results. This is obvious. I think that those responsible, some of them at least, should take the brave decision to submit their resignations and step down. If they do not find within themselves the resolve to do so we will help them.

But this is not the most important thing. Most important is to prepare for the 2014 Olympics, and we need to pour all our effort into this work. This is not the time to sink into despair. Of course we were all upset, all had our share of negative emotions, but we need to put this behind us now and move on, get ready for the 2014 Olympics. Look at Canada’s brilliant performance. Who would have guessed that Canada (even though it is a good sporting nation and so on) would win so many gold medals, take first place in the gold medal count? No one expected this. I think the Canadians themselves probably did not expect it. Now we also have just as much chance of putting on a good performance at the 2014 Sochi Olympics. So, let’s get to work on this.