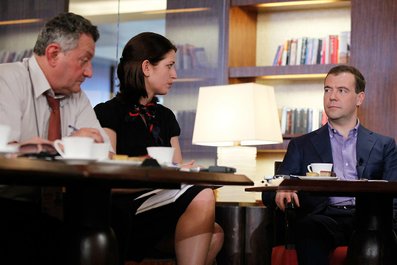 QUESTION: Mr President, the member states of what has now become the “Five” are all very different, with a mass of mutual contradictions, directly competing for global investment. Is there anything that really unites the BRICS states apart from high growth rates and the aspiration to increase their weight in the world? And the second question: how do you assess Russia’s investment attractiveness compared to the other members of the group?

PRESIDENT OF RUSSIA DMITRY MEDVEDEV: It is obvious that at present our countries are united not only because they are all emerging economies: some have more rapid growth, in others it is slower, some have been affected by the global economic crisis to a greater extent, some less, but there is no doubt whatsoever that our countries are rapidly developing and are attractive markets.

But apart from that, now that the forum has been joined by South Africa, the BRICS states are also united by shared views on development of international affairs, the world economy and political processes. The positions of our countries on key issues are very similar.

Let me remind you that at present the BRICS states are all members of the UN Security Council. China and Russia are its permanent members, as you know, while the others are non-permanent members. Despite some differences in the voting, for example, on the Libyan resolution, on the whole we hold very similar views. This shows that apart from economic factors, there is a bigger similarity between our nations, and that is the fundamental outlook on the future of global development, international cooperation, world economic system, and in general the way life should develop on our planet.

Now about Russia’s investment attractiveness: I would not want my comments today to be at odds with what I recently said about the investment climate. In general, there is no doubt that Russia is a very attractive country, because we have huge opportunities, an immense territory and an equally enormous market, great reserves of mineral resources, a growing economy and economic institutions. But we have also a lot of problems – I do not want to say that we are worse than other countries, that would be absolutely wrong, but our investment climate still requires a cardinal change, it must become a priority for the government, and a number of institutions have to be refined, there is no doubt about that. In this sense, our competitiveness is somewhat low compared to other BRICS countries. We must focus on the investment climate, which is what I did not so long ago.

QUESTION: A question about Libya. Have the BRICS countries agreed a position on Libya that they can present at the UN Security Council? And did you discuss at the bilateral meeting with the President of South Africa the reasons why the African Union’s initiative failed?

DMITRY MEDVEDEV: Let me just say that the BRICS states have very close positions: four countries abstained from voting on Resolution 1973, and South Africa voted in favour, but not because its views on this resolution were fundamentally different (we were fully aware what we were voting for and what the resolution signified), but rather out of solidarity, because that was the position of the African Union. I spoke about this issue with President of China Hu Jintao and Indian Prime Minister Singh, as well as with President of South Africa Jacob Zuma, and in addition all of us discussed it with President of Brazil Dilma Rousseff.

Our views are very similar, and they are as follows. We believe that the Security Council resolution must be executed regardless of whether we voted for it, like South Africa, or abstained. It must be executed in accordance with its spirit and the letter, and not in accordance with the arbitrary interpretations which have been made by several states.

Ultimately, what did we concede to or vote for? A resolution imposing a no-fly zone, which would stop the conflict from escalating and break up the warring parties. And what have we got as a result? We have what is in fact a military operation, which is not taking place on the ground but it is happening in the air, an operation in which a number of states are taking part and which was joined by NATO as a military bloc. The resolution has no mention of this. So when I hear that the resolution is at fault, that’s wrong. The resolution is absolutely adequate, but it must be implemented as it is, instead of trying to exceed the mandate that is laid down in it. This is a very dangerous trend in international relations. In fact, what we see is the misuse of powers laid down in Resolution 1973, which is a very broad interpretation of the resolution.

For example, the resolution on the developments in Ivory Coast, Resolution 1975, if I remember correctly, talks about using United Nations agencies, but not about supporting one of the sides in the conflict. The UN generally cannot support any side, but in fact that is what we have in Ivory Coast. To be honest, we have some very serious questions to the leadership of the United Nations because it is a very dangerous trend. The UN certainly should make an effort to separate conflicting parties, but it must never help one of the parties, even if we believe that it is in the right. If we talk about the events in Ivory Coast, we’ve seen atrocities and murders committed by both sides. Therefore, the resolutions must be implemented and enforced in accordance with their content, in accordance with their spirit and letter, and the BRICS states are in absolute agreement about this.

Link to this page: http://eng.news.kremlin.ru/transcripts/2076