A series of explosions in the skies of Russia’s Urals region, reportedly caused by a meteorite shower, has sparked panic in three major cities. Witnesses said that houses shuddered, windows were blown out and cellphones have stopped working.

Check out eyewitness accounts of the meteorite phenomenon, handpicked by RT.

According to unconfirmed reports, the meteorite was intercepted by an air defense unit at the Urzhumka settlement near Chelyabinsk. A missile salvo reportedly blew the meteorite to pieces at an altitude of 20 kilometers.

A bright flash was seen in the Chelyabinsk, Tyumen and Sverdlovsk regions, Russia’s Republic of Bashkiria and in northern Kazakhstan. 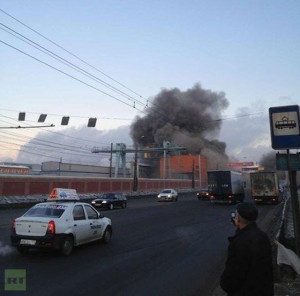 Over 400 people sought medical attention as a result of the incident, according to the Russian Interior Ministry. No serious injuries have been reported, with most of the injuries caused by broken glass and minor concussions.

Lifenews tabloid said that at least one piece of the fallen object caused damage on the ground in Chelyabinsk. According to preliminary reports, it crashed into a wall near a zinc factory, disrupting the city’s Internet and mobile service.

The Emergency Ministry reported that 20,000 rescue workers are operating in the region. Three aircraft were deployed to survey the area and locate other possible impact locations.

Witnesses said the explosion was so loud that it seemed like an earthquake and thunder had struck at the same time, and that there were huge trails of smoke across the sky. Others reported seeing burning objects fall to earth.

Cool – Like something out of a science fiction book…

Could you imagine what would have happened it the huge meteorite had hit? Ouch…

PS: Link to Videos about what is going on – http://video.kylekeeton.com/2013/02/russian-video-from-russia-meteorite-fall-on-russia-february-15th-2013.html