▫️The attacks have resulted in the elimination of more than 280 nationalists, 2 ammunition depots near Razdolovka in Donetsk People’s Republic, 5 tanks and other armoured combat vehicles, 6 field artillery mounts and 11 special vehicles. 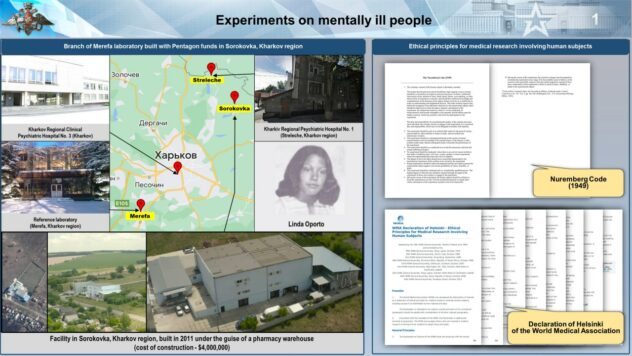 ​​🔹We have previously spoken about the experiments held by the employees of a laboratory in Merefa on the patients of a psychiatric clinic in Kharkov since 2019 to 2021. It has been noted that one of the organisers of this illegal activity was a US citizen Linda Oporto Al-Haroun.

🔹The documents received during the special military operation have revealed that this kind of investigations has been carried out in Ukraine at least since 2011 and Al-Haroun repeatedly visited the branch of the Merefa laboratory built with funds of the Pentagon in Sorokovka, Kharkov region.

🔹Despite the fact that this installation is provided with underground storage facilities and powerful ventilation systems, it is officially considered a company that produces food additives. At the same time, the site of the company bears clear signs of fictitiousness, while the equipment of the branch has been transported to the western regions of Ukraine under control of the Security Service of Ukraine (SSU).

🔹It confirms our concerns about the numerous violations of the international humanitarian law in Ukraine that are also defined by the Nuremberg Code and the Helsinki Declaration of the World Medical Association. They include: the voluntary consent of an individual to participate in an experiment; informing about the investigation to be carried out; prevention of excessive physical and mental suffering during an experiment, as well as tortures, inhumane or degrading treatment.

🔹According to the available information, highly active neuropeptides were tested on socially vulnerable citizens of Ukraine that caused irreversible damage to the central nervous system. This is a clear violation of the international treaties related to human rights.