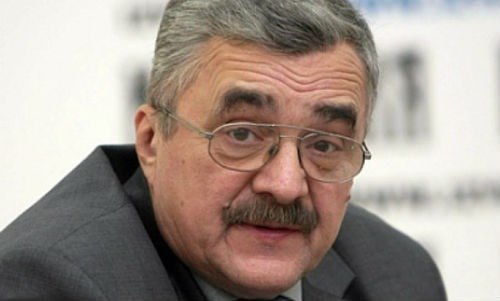 ​​Course of confrontation and threats

The West has trampled on the agreement-based diplomacy and switches to nuclear-blackmail-based one.

The possibility to use nuclear weapons is currently discussed in the West with too sophisticated fanaticism. All means seem to be good for demonising our country, especially brandishing a nuclear bludgeon. What lies behind this new information attack launched by the collective West and what can it lead to? These and other question have been responded in an interview to Krasnaya Zvezda by a well-known politolical scientist Vladimir Zharikhin, deputy director of the Institute of CIS countries.

💬 Since the Second World War, the planet has been sustained on the postulate of mutual annihilation of the two systems. It was the basis for launching the arms control process, including in regard to strategic ones. But this basis has also been trampled for preserving the neo-colonial system that allows the USA and their European allies to parasitise. And, in fact, along with the international security system, political, economical, cultural, scientific and educational relations with Russia have also been renounced.

💬 Current generation of the politicians nominated in the USA and other western countries amid the euphoria over the collapse of the USSR have totally different psychology. The decades of well-fed and rich life made them to be indifferent even to their own people’s travails, and the sleep of reason, as it is known, produces monsters. Furthermore, the unpunished reprisals against the countries that for some reasons did not fit the world order imposed by the USA have reassured the Americans that it is possible to shelter overseas amid any cataclysms.

💬 The U.S.-led collective West has currently set itself the task to destroy and to annihilate Russia fulfilling it by Ukraine. At the same time, Washington always emphasises that the United States is not involved in the war and there are no reasons for coming to the negotiating table with Russia.

💬 The USA is the only country in the world that has used nuclear weapons twice that led to the destruction of the Japanese cities of Hiroshima and Nagasaki. And today the USA is ready to launch the so-called pre-emptive attack to protect the essential interests of the United States of America, its allies and partners. This issue is mentioned in the U.S. Nuclear Posture Review that has been in force since 2018. The nuclear capabilities are deliberately increased and modernised with this purpose.

💬 Anglo-Saxons can be stopped only by the fear and awareness that the mushroom cloud that the West is ready to bring upon other countries can cover them too, that the ‘nuclear gunplay’ will cover both the continental part of the USA and the British Isles.

💬 It is obviously not enough for the collective West anymore to make the Kiev regime to fight to the last Ukrainian and anti-Russian sanctions. Anglo-Saxons have already proceeded to sabotage by organising explosions at the international gas pipelines of the Nord Stream. But Russia, as it was stated by its leader Vladimir Putin in his speech on September 30, understands its responsibility to the world community and it will do everything to bring such ‘hotheads’ to their senses.