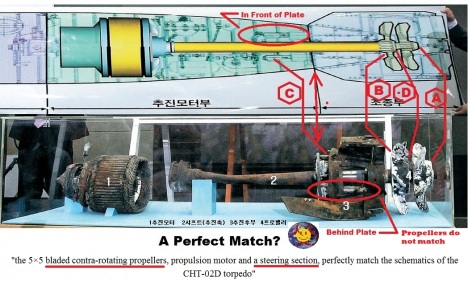 How is it that a submarine of a fifth-rate power was able to penetrate a U.S.-South Korean naval exercise and sink a ship that was designed for anti-submarine warfare?

Could be huge lies are going on?

It was reported that an investigation in South Korea has determined the metal and explosive residues from the torpedo that sank their ship Cheonan, are consistent with that used by German manufacturers.

The metallic debris and chemical residue appear to be consistent with a type of torpedo made in Germany, indicating the North may have been trying to disguise its involvement by avoiding arms made by allies China and Russia, Yonhap quoted the official as saying.

Oops – says the little bird! Looks like things are coming unraveled in the North/South Korean issue. Looks like We have a probable German torpedo instead of a North Korean (Chinese) torpedo…

That means that the official report that has been so wonderfully exploited all over the internet becomes very worthless due to lack of any reality of facts!

Now it makes sense why Windows to Russia was attacked so early in the game. They had to keep the lie out long enough without opposition to set everyone’s minds to the fact that North Korea is Super Evil and needs to be destroyed…