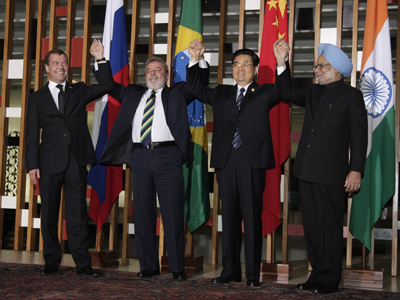 We are watching important times in the world and if you are smart you will take your news from outside sources from the mainstream. The clock is ticking and the hands are moving non stop. The world is getting ready for a world with out the Western Empire in the lead. I once wrote many articles called something like – Change is in the wind! Several parts were written. People disagreed with me but I promise you, the balance of power is shifting in the world and it is a natural process that has happened all through time…

The wind just blew today and in fact it blew several times. The day started with India telling the world that it will not stop buying Iranian oil. Now the BRICS stand together as is only correct…

The nations also plan to sign agreements facilitating banks to extend credit to other members in local currency in order to diminish role of the dollar in trade between them (BRICS).

The BRICS will also launch a benchmark equity index derivative shared by the stock exchanges of all the five nations as soon as Friday. The instruments could be bought in local currencies.

The nations also plan to sign agreements facilitating banks to extend credit to other members in local currency in order to diminish role of the dollar in trade between them.

Using national currencies would reduce macroeconomic risks, stressed Russian Economic Development Minister Elvira Nabiullina. “All countries can face such risks this is why I believe it is very important to use national currencies in developing trade cooperation,” she said during the address at the summit.

“The turnover among the BRICS countries is rising,” explains Lissovolik. “In this sense, boosting trade, boosting investment and boosting the role of currencies between BRICS would be a step toward creating a new reserve currency”.