It was just a few months ago that workers who were building a federal road to the site of the 2012 APEC summit near Vladivostok dug up a mass burial grave. The huge grave held some of the victims of the “political persecution campaigns” in the 1930s.

The road construction was immediately stopped and the site blocked from any other construction. After that came the question – What to do now? 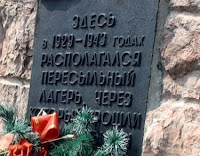 Vladivostok’s residents think the remains should be reburied in a proper way and a proper place. So a commission has been set up and will decide where to rebury the dead found.

This seems to be a normal happening in the world and the past always has a way of rearing her head time and time again. The video shows that there is many remains to be uncovered.